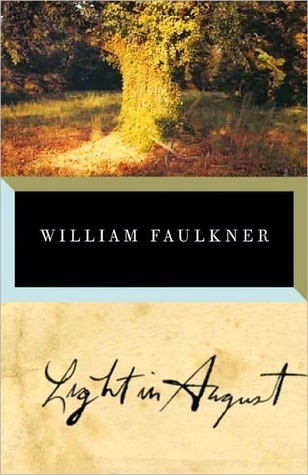 What a book. This could be a follow-up to "Gone With the Wind" seventy years later. A book about the Deep South, about country life, families, hard work, racism, crime, religion, morale, everything a story about this region and time should have.

Faulkner has a brilliant way of writing, I like his style, even though he jumps around from time to time, he still follows his path and you can follow it well without any confusion. There are a few major stories with several subplots but William Faulkner manages to tell them all in a way that it's not difficult to follow. An accessible story with both likeable and non-likeable characters.

I'm not surprised he received the Pulitzer Prize for two of his works, "A Fable" and "The Reivers", both of which have gone on my wishlist.

"One of William Faulkner’s most admired and accessible novels, Light in August reveals the great American author at the height of his powers. Lena Grove’s resolute search for the father of her unborn child begets a rich, poignant, and ultimately hopeful story of perseverance in the face of mortality. It also acquaints us with several of Faulkner’s most unforgettable characters, including the Reverend Gail Hightower, plagued by visions of Confederate horsemen, and Joe Christmas, a ragged, itinerant soul obsessed with his mixed-race ancestry. Powerfully entwining these characters’ stories, Light in August brings to life Faulkner’s imaginary South, one of literature’s great invented landscapes, in all of its unerringly fascinating glory."

William Faulkner received the Nobel Prize for Literature in 1949 "for his powerful and artistically unique contribution to the modern American novel."

I contribute to this page: Read the Nobels and you can find all my blogs about Nobel Prize winning authors and their books here.
Posted by Marianne at 13:14