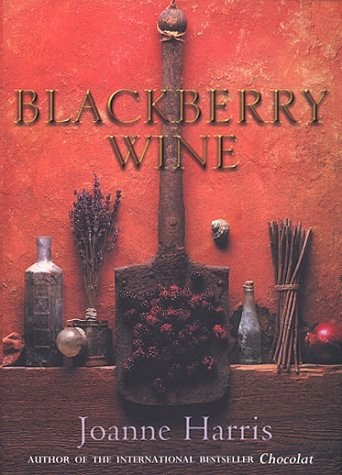 I have read several books by Joanne Harris. My first one was "Chocolat" in which I was a little disappointed but probably due to the hype around it at the time, I just expected it to be more. Her reads are nice, that's probably about the best I can say about them, they tell a little about French life, usually with a foreigner thrown in, contain recipes, are a little on the chick lit side but not entirely because they rarely are about love.

So far, I have also read "Five Quarters of the Orange" and "Coastliners", and the latter has been my favourite.

Until I read this one. "Blackberry Wine" is an interesting story about some old wine, an old farm, everything old, really. It reminded me a little of Isabel Allende and her magic realism stories.

From the back cover: "Jay Mackintosh is a 37-year-old has-been writer from London. Fourteen years have passed since his first novel, Jackapple Joe, won the Prix Goncourt. His only happiness comes from dreaming about the golden summers of his boyhood that he spent in the company of an eccentric vintner who was the inspiration of Jay's debut novel, but who one day mysteriously vanished. Under the strange effects of a bottle of Joe's '75 Special, Jay decides to purchase a derelict yet promising château in Lansquenet-sous-Tannes. There, a ghost from his past waits to confront him, and his new neighbour, the reclusive Marise - haunted, lovely and dangerous - hides a terrible secret behind her closed shutters. Between them, there seems to be a mysterious chemistry. Or could it be magic?"
Posted by Marianne at 14:58