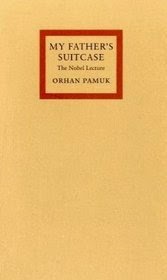 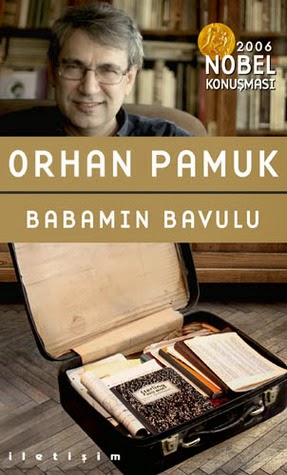 The title of this collection refers to the first story in the book, the lecture Orhan Pamuk gave in Stockholm when he accepted the Nobel Prize for Literature. I read the German translation ("Der Koffer meines Vaters. Aus dem Leben eines Schriftstellers") that does not only have the addition to the title "From the life of an author" but also has 344 pages as opposed to the English one with only 28 pages. There are a lot more stories in the German one. He has put them together in subcategories titled "Life", "Istanbul", "America", "Reading and Books", "My Books are My Life", "Pictures and Texts", "Politics and Citizenship" and "Paris Review" where he publishes his interview for Paris Review.

The parts of this book are more like articles rather than short stories. I learned a lot about one of my favourite writers. I had the feeling I got closer to Orhan Pamuk, the writer, but also to Orhan Pamuk the private man. He talks to us about Turkey, its history and its contemporary politics, Istanbul, as always, where Orhan Pamuk is, Istanbul is not far. But we can also learn what he thinks about writing and how to be a writer.

A great book, I am happy that it was translated into German. Even if they will never translate all of it into English, try to read at least "My Father's Suitcase", it is a wonderful story.

From the author's website: "'Two years before his death, my father gave me a small suitcase full of his writings, hand writings and notebooks.'
Orhan Pamuk gave a speech called 'My Father’s Suitcase' when he received the Nobel Prize in Literature in December 2006. This emotional speech which sincerely conveys the spirit of Pamuk’s thirty two years of writing effort, had a deep, worldwide impact. This book combines 'My Father’s Suitcase' which is a basic text about writing and living with Pamuk’s two other speeches in which the same subjects and problems are discussed from other perspectives. 'The Implied Author', the speech that Pamuk gave when he received the Puterbaugh Prize given by World Literature magazine, in April 2006 is about the psychology of writing and the urge and adventure of being a writer. Pamuk’s other speech, 'In Kars and in Frankfurt' that was given when he received the Peace Prize given by the German Publishers Associations in October 2005 is investigating the power of the writer to put himself in another’s place and the political consequences of this very natural human talent. My Father’s Suitcase consists of three speeches that are seen as a whole by their writer.
It’s a unique, personal book on what writing is, how to become a writer, life and writing, the writer’s patience and the secrets of the art of novel (from the author's website)"

I contribute to this page: Read the Nobels and you can find all my blogs about Nobel Prize winning authors and their books here.
Posted by Marianne at 12:36