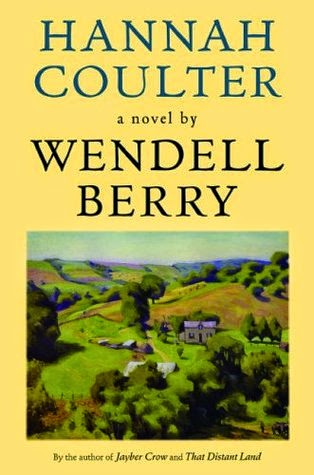 A friend recommended this book to me. I might not have read it first if I'd found it in a bookshop because it's the umpteenth novel in a series of stories about the inhabitants of Port William. But I doubt that it matters because I can imagine that they all start at the life of a certain person and go on until today, so they will probably intermingle.

Hannah Coulter, for example, is the mother of Nathan Coulter whose story was written quite a while before that of his mother.

Anyway, Hannah Coulter led a long life in rural Kentucky, she had several children, lived through World War II, the Great Depression, and everything that that encounters. She talks about her life in a diary form but not necessarily in a chronological one.

I came to like Hannah and her loved ones. The way they work together, very old form, maybe still possible in some rural areas but certainly not everywhere.

The writing style is pleasing, just as if your grandma was telling you about your life. I liked that.

"In the latest installment in Wendell Berry's long story about the citizens of Port William, Hannah Coulter remembers. Her first husband, Virgil, was declared 'missing in action' shortly after the Battle of the Bulge, and after she married Nathan Coulter about all he could tell Hannah about the Battle of Okinawa was 'Ignorant boys, killing each other. 'The community was stunned and diminished by the war, with some of its sons lost forever and others returning home determined to carry on. Now, in her late seventies, twice-widowed and alone, Hannah sorts through her memories: of her childhood, of young love and loss, of raising children and the changing seasons. She turns her plain gaze to a community facing its long deterioration, where, she says, 'We feel the old fabric torn, pulling apart, and we know how much we have loved each other.' Hannah offers her summation: her stories and her gratitude, for the membership in Port William, and for her whole life, a part of the great continuum of love and memory, grief and strength."