This week's topic is: Animals from Books (these could be mythical, real, main characters, sidekicks, companions/pets, shifters, etc.)

I'm not really an animal person and we already had this topic a while ago (in November), well, a similar one: Books with Animals. And since I have only read one other book in the meantime that would fit here (One Man and His Dog), I have decided to twist the top ten a little today. I try not to stray too far away from this, but in a cheeky way.

I was thinking what other books I could have that link to an animal and then it dawned on me. I love Turkish authors and they come from a country that shares its name with an animal (at least in English): Turkey.

In Turkish it's Türkiye for the country and Hindi for the bird, in German Türkei and Truthahn, in French Turquie and Dinde, in Spanish Turquía and pavo, in Dutch Turkije and Kalkoen, in Swedish Turkiet and Kalkoner and in Esperanto Turkio and Meleagro. None of them has the same word for both. Maybe someone knows an example where it is the same word in both languages (other than English) but I don't know of any. 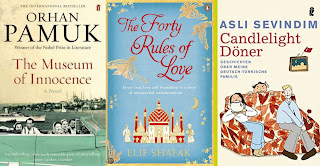 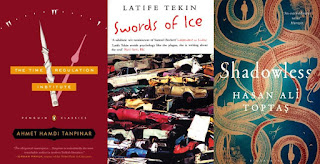