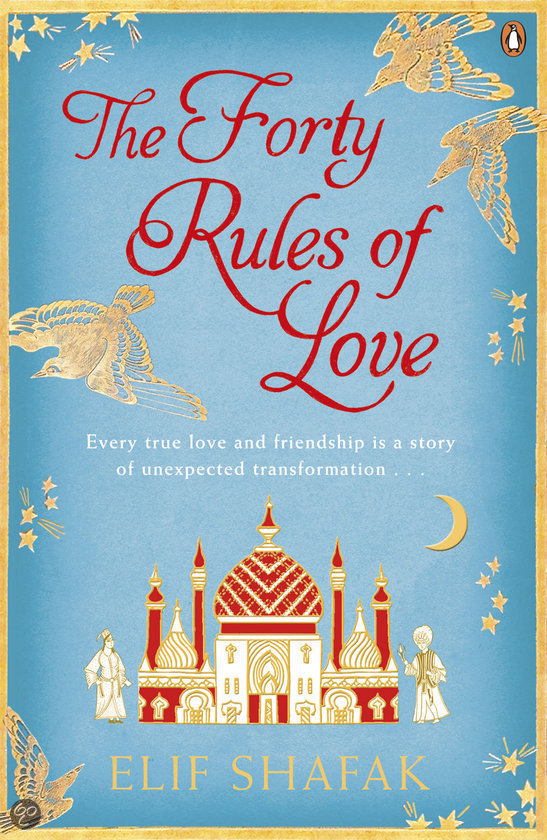 We had a great discussion, not just because we all read the book but also because we had two members who could explain to us all the questions we had. Wonderful.

There are really two novels in this book. Ella, an American woman receives a script to be edited. It is about Rumi, a Muslim poet who lived in the 13th century. His poems are world famous.

We thought the story of Rumi was really fantastic, he teaches fate and love. The book made some of us both peaceful and tearful. We liked that it went through different stages, going from the present to the past, that it had many characters. We also liked that the author uses different narrators so you can see the events from different perspectives (always a favourite of mine). We have a chance to develop empathy.

We asked ourselves whether there was a political message. Can fiction be political? What does she want to tell us with this story?

There is something special to the original language of the book. Elif Şafak wrote it in English first, then translated it into Turkish and retranslated and rewrote it in English. It is a bestseller in Turkey, people like her, she is nice. Elif Şafak is a world person, international, she respects all cultures and religions, is interested in Sufism. The novel is fiction, even though Rumi and Shamz are real people. She uses all those vices to talk about the differences in the Islamic world, therefore it is such a good book for this day and age.

As already mentioned, we especially loved the inner part, the book in the book, not so much Ella's story. She seemed to us like a caricature of a housewife from the 40s. The "outer book" doesn't seem real, seemed like "Chick lit" to us, added to attract more readers.

Another little criticism about Elif Şafak. She is a wonderfully articulate intelligent woman but her usuing Americanism in the 13th century was a little disturbing.

Some of my favourite quotes of the novel:
"'The sharia is like a candle', said Shams of Tabriz. 'It provides us with much valuable light. But let us not forget that a candle helps us to go from one place to another in the dark. If we forget where we are headed and instead concentrate on the candle, what good is it?'"
and "Each time I say good-bye to a place I like, I feel like I am leaving a part of me behind."

And a last remark by one of our members: "I think that if everyone just adopted one of the rules ... the world would be a better place!"

From the back cover:
"An American housewife is transformed by an intriguing manuscript about the Sufi mystic poet Rumi.

In this lyrical, exuberant follow-up to her 2007 novel, The Bastard of Istanbul, acclaimed Turkish author Elif Shafak unfolds two tantalizing parallel narratives- one contemporary and the other set in the thirteenth century, when Rumi encountered his spiritual mentor, the whirling dervish known as Shams of Tabriz-that together incarnate the poet's timeless message of love.

Ella Rubenstein is forty years old and unhappily married when she takes a job as a reader for a literary agent. Her first assignment is to read and report on Sweet Blasphemy, a novel written by a man named Aziz Zahara. Ella is mesmerized by his tale of Shams's search for Rumi and the dervish's role in transforming the successful but unhappy cleric into a committed mystic, passionate poet, and advocate of love. She is also taken with Shams's lessons, or rules, that offer insight into an ancient philosophy based on the unity of all people and religions, and the presence of love in each and every one of us. As she reads on, she realizes that Rumi's story mir­rors her own and that Zahara - like Shams - has come to set her free."

We discussed this in our book club in February 2012.
Posted by Marianne at 19:02