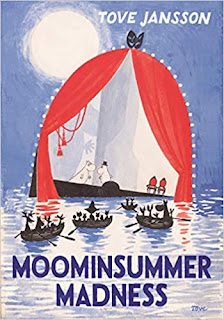 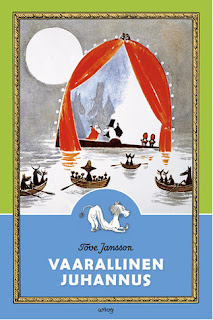 I hadn't read anything about the "Moomins" but I'd heard about them and seen their pictures everywhere. They're cute. I can only explain my ignorance of the books by the fact that we spent most of our sons' childhoods in England where they were not as popular as elsewhere.

So, I never read the "Moomins" as a child nor did I read them while my children were little. I suppose my perspective would have been a little different.

I read it with my online book club, all of us grown-ups, some of us with little kids, others with no kids or grown-up kids, like me. And a large number of Finnish members which is why this book was chosen, I guess. I quite liked it though I think I would have enjoyed it more if I'd read it with a child. Or maybe if I'd read the first book first. This was number 5 and the author assumed we know who is who and, even more important, what is what. So, the Moomins belong to the trolls, then there are mymbles, hemuls, fillyjonks, and a rat.

The Moomins live in a house in Moomin valley. When a volcano erupts, the valley is flooded and the Moomins have to seek shelter elsewhere. They find a theatre that they don't recognize as such since they've never seen or heard of one before but in the end they even present a play, even if somewhat haphazardly.

There is plenty of depth in the story, though, to be enjoyed by adults, as well. The characters may be eccentric but they seem to be just as "normal" as us human beings. Good writing and good psychology. The story is easy to follow yet not boring.

Some thoughts by the members:

"When a flood sweeps through the valley, the Moomins must find a new house. And with typical Moomin good luck, one just happens to be floating by. It looks normal enough, but there are curtains where one wall should be, strange rows of lights, and other odd amenities. Then Moomintroll and the Snork Maiden disappear, and the family realize that the house may hold the answers to more than they ever dreamed."