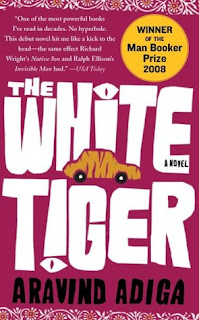 While this book has a lot of information about the life of any average Indian who lives in poverty, it wasn't my favourite book about India. By far not my favourite, maybe even the one I liked least.

Was it the style? Maybe. Did I dislike the protagonist? Of course I didn't. Could I warm to any of the others? Certainly not.

Having said that, I am sure it is a picture of the true India, at least part of it. But even in the worst society of all, there is usually someone who is kind-hearted, there are people who are not just selfish and egotistic. I couldn't find anyone like that in the whole story. And I know many really nice Indians. None of them showed up in this book.

I have tried to find the reason why this book won the Booker prize. Apparently, "Balram’s journey from darkness of village life to the light of entrepreneurial success is utterly amoral, brilliantly irreverent, deeply endearing and altogether unforgettable."

Maybe it is unforgettable but not because it is such a great book. At least not in my eyes. This is not the first Booker prize winner I disliked. Maybe I should stay away from them in future. Mind you, there are a few I do like but they are more the exception than the rule.

Comments from the discussion:

Btw, the protatonist always talks about the four greatest Persian poets and mentions "Rumi, Iqbal, Mirza Ghalib and another fellow whose name he has forgotten". I keep wondering who the fourth one is supposed to be.

"No saris. No scents. No spices. No music. No lyricism. No illusions.

This is India now.

Balram Halwai is a complicated man. Servant. Philosopher. Entrepreneur. Murderer. Over the course of seven nights, by the scattered light of a preposterous chandelier, Balram tells us the terrible and transfixing story of how he came to be a success in life - having nothing but his own wits to help him along. Born in a village in the dark heart of India, Balram gets a break when he is hired as a driver for a wealthy man, two Pomeranians (Puddles and Cuddles), and the rich man's (very unlucky) son.

Through Balram's eyes, we see India as we've never seen it before: the cockroaches and the call centers, the prostitutes and the worshippers, the water buffalo and, trapped in so many kinds of cages that escape is (almost) impossible, the white tiger. And with a charisma as undeniable as it is unexpected, he teaches us that religion doesn't create morality and money doesn't solve every problem - but decency can still be found in a corrupt world, and you can get what you want out of life if you eavesdrop on the right conversations."

Aravind Adiga won the Booker Prize for "The White Tiger" in 2008.