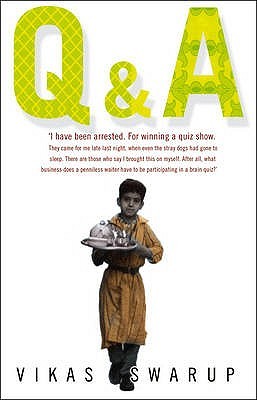 This book proves it again. Never judge a book by its cover. Or its movie. Or the description of the movie. After all the upheaval about the movie (Slumdog Millionaire), I thought this was just another chick lit, the way it was described it was an "easy" read, a "beach" read, whatever you might want to call it if you say there is really nothing in it that's worth touching.

This was not at all what I expected. Yes, a little Indian waiter wins an immense amount of money and is put into jail for it. But the story is so much more. For every single correct answer there is a story why the boy knew it even though he grew up in the slums. So we learn one question after the next about the life, not just of young Ram Mohammad Thomas but about many other people living in India, especially the poor ones.

A book well worth reading. Yes, it is an easy read but with a lot of content, funny and tragic at the same time, lovely and heart-breaking.

From the back cover:
"Eighteen-year-old Ram Mohammad Thomas is in prison after answering twelve questions correctly on a TV quiz show to win one billion rupees. The producers have arrested him, convinced that he has cheated his way to victory. Twelve extraordinary events in street-kid Ram's life - how he was found in a dustbin by a priest; came to have three names; fooled a professional hitman; even fell in love - give him the crucial answers. In his warm-hearted tale lies all the comedy, tragedy, joy and pathos of modern India."
Posted by Marianne at 13:20