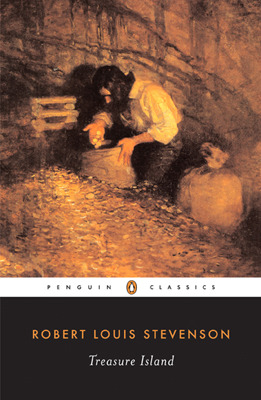 I have never read this book before in my life. I haven't even seen one of the many different film adaptations but I was familiar with a lot of the characters, especially Jim Hawkins, Captain Flint and the parrot of the same name, Long John Silver, well, the main ones.

I wouldn't call this a children's book, yes, children can read it, but the story is also interesting for adults, quite some excitement going on, you need to guess what might happen next and won't succeed every time.

If someone had asked me beforehand whether I would like this, I am sure I would not have known. But I really did like it. A lot of drama and action in the story. So, if you don't want too much love in your classics, maybe this is one for you. A true classic.

From the back cover: "Originally conceived as a story for boys, Stevenson's novel is narrated by the teenage Jim Hawkins, who outwits a gang of murderous pirates led by that unforgettable avatar of immorality, Long John Silver. Admired by Mark Twain, Rudyard Kipling, and (reluctantly) Henry James, the story has the dreamlike quality of a fairy tale. It has worked its way into the collective imagination of more than five generations of readers, young and old alike, gaining the power of myth.
Although thoroughly British in its setting and characters, Treasure Island, as John Seelye shows, has an American dimension, drawing on the author's experiences living in California, and owes no small debt to Washington Irving's ghost stories and James Fenimore Cooper's tales of adventures. This edition also includes Stevenson's own essay about the composition of Treasure Island, written just before his death."
Posted by Marianne at 15:07