Andersson, Per J. "From the Swede who took the train and saw the world with different eyes" 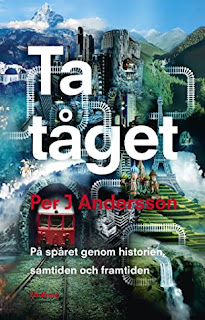 Andersson, Per J. "From the Swede who took the train and saw the world with different eyes" (aka: Take the train: on the track through history, present and future) (Swedish: Ta tåget: på spåret genom historien, samtiden och framtiden) - 2019

This is one of the books where I found an English title (even two English titles in this case) but no picture of the cover. So, I hope it has been translated. If not, sorry, let's hope it will get a translation. Because it is a good book. It's not what I expected. It thought this was a description of his travels. And it is, in a way. But it was more a description of his time in the train in order to get to the places rather than about the places itself.

It starts by the author travelling by train with his parents as a little child. It includes a description of his grandparents who worked for the train company in Sweden. Then he goes on how he travelled as a teenager by interrail and later with his children when they reached that age. He visits Italy and Germany, India and Nepal, the USA, takes the Orient Express. And mainly, he advocates travels by train in order to save the world.

I used to take the train a lot when I was younger. From fifth grade onwards, I took the train to get to my secondary school, at the beginning it was even a steam train which always amazes most of my American friends. Then, I used it to get to work. I also participated in the Interrail community, I went to Scandinavia (Denmark, Sweden, Finland) with it, Great memories. And all in all, a very well written book.

Then there are books that mention train rides:
Greene, Graham "Stamboul Train" - 1932
Christie, Agatha "Murder on the Orient Express" - 1934 (the story was also turned into several wonderful films, my favourite Hercule Poirot is, of course, David Suchet, but the greatest landscapes can be seen in the recent one by Sir Kenneth Branagh)
Guthrie, Woodie "This Land is My Land" - 1943
Theroux, Paul "The Great Railway Bazaar" - 1975
MacLean, Alistair "Death Train" - 1989
Diskis, Jenny "Stranger on a Train - Daydreaming and Smoking Around America" - 2002
Nair, Anita "Ladies Coupé" - 2001
Liksom, Rosa "Compartment No. 6" (Finnish: Hytti nro 6) - 2012

I am sure we can all find other books where trains play an important role. I can think of a few, some of them I've read, others are on my wishlist, others I just came across.

He also has a good website (in Swedish): Bloggarvagabond

And this is the German cover: 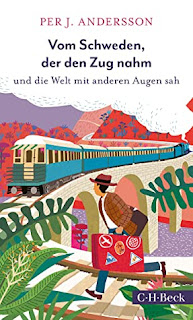 From the back cover: (Description here.)

"All Aboard! How You Learn to Stop Worrying About Climate Change and Love to Travel by Train
Per J. Andersson

In times of climate change and shifting global powers, traveling by train can offer not only a green alternative but also fascinating way of exploring the distance between two places and the people you meet on the way…

In this book Per J Andersson makes us his travel companions on enthralling train rides throughout the world. We embark on classic train journeys through the gruff North of England and on Indian railroads, on exhausting long-haul train rides through America and even on a trip on the infamous Orient Express from Paris to Istanbul.

While we watch the world roll past us through the windows, Andersson tells us all about what we see and about everything else hidden from our view: from stories and meanings behind train stations to the multi-layered history of train travel itself, its value in different times and places, how humans experience and use trains and what impact the railway will have in the future. As trains represent participation, social responsibility and environmental awareness, everyone who believes in a future for the railway also believes in the value of caring for future generations.

Per J. Andersson has written an exciting and informative book that will make every train ride an astonishing experience."