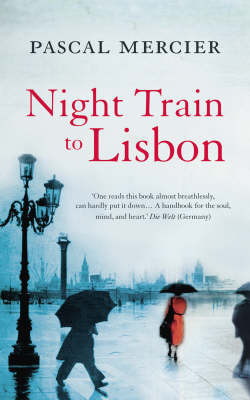 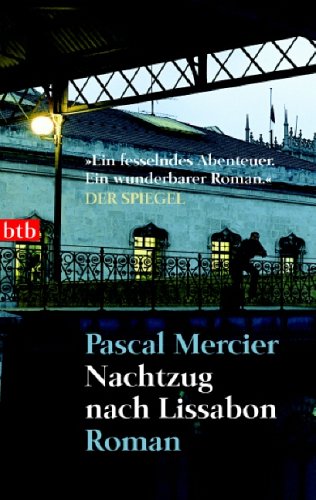 A Swiss Professor of ancient languages happens to meet a Portuguese woman and finds a book in Portuguese, so he gives up his whole life and goes to Lisbon to find the author. He is going on a quest, tracking down the origin of the book and the life of the author. But in the author he also finds himself.

This is a philosophical book, someone tries to find himself. It's also almost like an epistolary Victorian novel. But it is also historical, informed us about the resistance during the dictatorship in Portugal (1933-74). A book about finding yourself. These two men are leading a parallel life: friends, family, failed marriages, everything seems to mirror the other one's life. Also a lovely description of language, how you can be a different person in another language and culture..

Some of our readers found the language difficult, we thought that might have been the translation. However, quite a few liked it also in the English translation. Quite a few of the readers said they will probably read it more times (I've read it twice so far.). It brought up so many questions. Somebody said the book makes a difference in her life.

The author paints some very visual imagines for us. This is a full, active book, it requires you to be an active reader. The story is very deep and intriguing.

One of our overseas members said it seemed very European, a person trapped in their role in life, in order to step out they had to change completely.

A Czech proverb says: Learn a new language and get a new soul. (I love that proverb, very true.)
People who travel find another world.

I love history, I love languages - and I love books. So this was the perfect recipe for a book. And most of us could find a lot of resemblances to our lives. After all, the protagonist leaves his country and goes somewhere else.

We discussed this in our book club in March 2010.

From the back cover: "A huge international best seller, this ambitious novel plumbs the depths of our shared humanity to offer up a breathtaking insight into life, love, and literature itself. A major hit in Germany that went on to become one of Europe’s biggest literary blockbusters in the last five years, Night Train to Lisbon is an astonishing novel, a compelling exploration of consciousness, The possibility of truly understanding another person, and the ability of language to define our very selves. Raimund Gregorius is a Latin teacher at a Swiss college who one day - after a chance encounter with a mysterious Portuguese woman - abandons his old life to start a new one. He takes the night train to Lisbon and carries with him a book by Amadeu de Prado, a (fictional) Portuguese doctor and essayist whose writings explore the ideas of loneliness, mortality, death, friendship, love, and loyalty. Gregorius becomes obsessed by what he reads and restlessly struggles to comprehend the life of the author. His investigations lead him all over the city of Lisbon, as he speaks to those who were entangled in Prado’s life. Gradually, the picture of an extraordinary man emerges - a doctor and poet who rebelled against Salazar's dictatorship."
Posted by Marianne at 19:16