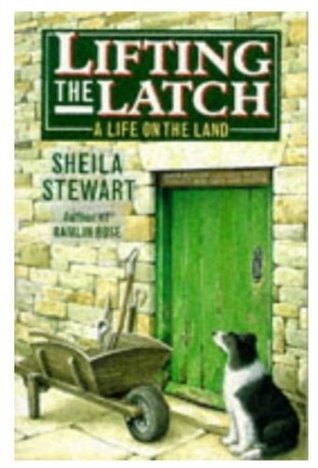 "For eighty years Mont Abbott lived and worked on the land in Oxfordshire. In this record by Sheila Stewart, Mont 'lifts the latch' and takes us into a forgotten world of roly-poly puddings and street fairs, describing his lost skills of carting and shepherding to the joys of singing in the church choir, and the loyalty of a rural community."

I met Sheila Stewart on a talk she gave at our local W.I. when she talked about her other book "Ramlin Rose". I read it and loved it, so had to get this one, as well.

I grew up in a rural area myself but quite a bit later than Mont Abbott. Sheila Stewart doesn't just describe the life of this remarkable man but also draws a great picture of how life was about a century ago. People led a hard life, lots of work, very simple, but people cared for each other. With Mont we see the arrival of the first cars, the introduction of technology and hence change of farming life, we learn about the organization of farms, the hierarchy of life, traditions and ceremonies that were kept. Mont also survived two world wars. What a life!

Sheila Stewart managed to draw a picture of all that with lots and lots of information again with a great sense of humour and sensitivity toward a man who told her the story of his life.

What can I say, I loved this book.

From the back cover: "In this extraordinary piece of social history, Sheila Stewart takes us into the life of Mont Abbott, who for nearly eighty years has lived and worked on the land near the parish of Enstone in Oxfordshire. Constructed from a series of taped conversations, Lifting the Latch is a record of the joys of a country life that no longer exists and of the memorable cast of characters who took part in it, as well as a document that paints a grimmer picture of personal tragedy and rural hardship before the existence of the welfare state."
Posted by Marianne at 14:07