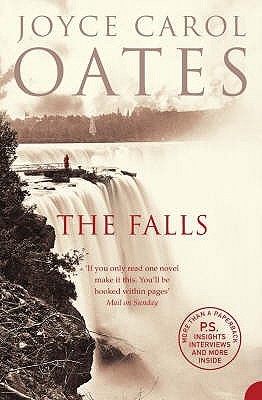 "A man climbs over the railings and plunges into Niagara Falls. A newlywed, he has left behind his wife, Ariah Erskine, in the honeymoon suite the morning after their wedding."

This is how the story begins. The "Widow Bride" starts a new life but her past catches up with her.

My third Joyce Carol Oates novel. Liked it just as well as the other ones. Her characters are so alive. As she describes every single person, you have sympathy with all of them because you can see everybody's point. I really thought I knew everyone. And, yet, you can never tell what would happen next, everything comes so unexpectedly.

The novel left me devastated. Great read. My wish, award JCO the Nobel Prize for Literature.

From the back cover:
"A novel of tremendous sweep and pace about the American family in crisis and a tale of murder, loss and romance in the mist of Niagara Falls. It is the crowning achievement of Joyce Carol Oates's career to date. newly-wed, and his bride has been left behind in the honeymoon suite the morning after their wedding. For two weeks, Alma, the deserted bride, waits by the side of the roaring waterfall for news of her husband's recovered body. During her vigil, an unlikely new love story begins to unfold when she meets a wealthy lawyer who is transfixed by her strange, otherworldly gaze. So it all begins, in the 1950s, with the dark foreboding of the Falls as the sinister background to the tragedy. secrets and sins; of lawsuits, murder and, eventually redemption.As Alma's children learn that their past is enmeshed with a hushed-up scandal involving radioactive waste materials, they must confront not only their personal history but America's murky past: the despoiling of the American landscape and the corruption and greed of the massive industrial expansion of the 1950s and 1960s. crisis -- but also about America itself in the mid-20th century. This book alone places Joyce Carol Oates definitively in the company of the Great American Novelists."

Find links to all my other Joyce Carol Oates reviews here.
Posted by Marianne at 15:01