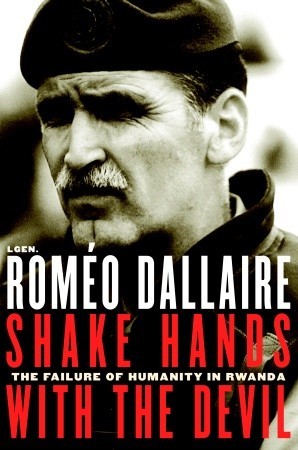 Dallaire, Roméo "Shake Hands with the Devil: The Failure of Humanity in Rwanda" - 2003

Tough read. But worthwile. General Dallaire was the UN commander in Rwanda during the genocide in 1994 (the year my son was born). It is incredible what happened. Roméo Dallaire describes everything in detail. Certainly not easy to remember all the abbreviations. Thank God for the glossary in the back.

Highly recommendable if you are interested in the problems going on in this world. The book made a big impression to everyone, it felt very important.

First of all, the author is not a novelist. He is a general, a military man who tries to describe the events in 1994 when his task was to bring peace to Rwanda. The book is an account of what was happening, a chronological list, if you will, of his experiences. His accounts are filled with abbreviations, acronyms, names. Granted, there is an impressively huge list of all those in the back, one with all the pages every single person in the book, the other one with the description of all those abbreviations, a short explanation as to the people etc. But, you can't go back to those lists all the time, otherwise you lose track of the events. So, it's hard to follow and it's not a book you would read in a couple of days, especially considering its 592 pages (even without the appendix).

However, it is still worth reading!! The war this poor guy had to fight - not with the Rwandans but with bureaucracy - the people who sent him there to prevent a war. And then he had to stand by watching two peoples killing each other, well, mainly one killing the other, one of the largest genocides in history, without being able to do what he considered necessary to prevent this. It must have been heart-wrenching. Well, it was. This war didn't just destroy the lives of probably a million Tutsis and Hutus, it also destroyed General Dallaire's and his family's life since he was unable to live with it. I can see how you are never able to return to your former life after any kind of war or even 'conflict' but having to stand by and just watch … well, read the book. It's worth it!

We all achieved great respect for the man, what he went through, it takes a particular kind of person. We were very impressed with him, what is he made of, how did he persevere and survive? We found him very sympathetic, very heroic. Someone said, if  she was to be a soldier she would like to be under a command of a person like him. He never expected anything from anyone what he wouldn't go through himself.

We had a talk about genocide/holocaust and how difficult it must have been not to take part. According to a study, 10% will refuse to take part in it. 80% will take part, 10-15% become harmed in the process, they become killers. People often cave under social pressure.

In any case, we must make sure it will never happen again.

We discussed this in our book club in August 2009

From the back cover: "On the tenth anniversary of the date that UN peacekeepers landed in Rwanda, Random House Canada is proud to publish the unforgettable first-hand account of the genocide by the man who led the UN mission. Digging deep into shattering memories, General Dallaire has written a powerful story of betrayal, naïveté, racism and international politics. His message is simple and undeniable: 'Never again.'

When Lt-Gen. Roméo Dallaire received the call to serve as force commander of the UN intervention in Rwanda in 1993, he thought he was heading off on a modest and straightforward peacekeeping mission. Thirteen months later he flew home from Africa, broken, disillusioned and suicidal, having witnessed the slaughter of 800,000 Rwandans in only a hundred days. In Shake Hands with the Devil, he takes the reader with him on a return voyage into the hell of Rwanda, vividly recreating the events the international community turned its back on. This book is an unsparing eyewitness account of the failure by humanity to stop the genocide, despite timely warnings.

Woven through the story of this disastrous mission is Dallaire’s own journey from confident Cold Warrior, to devastated UN commander, to retired general engaged in a painful struggle to find a measure of peace, reconciliation and hope. This book is General Dallaire’s personal account of his conversion from a man certain of his worth and secure in his assumptions to a man conscious of his own weaknesses and failures and critical of the institutions he’d relied on. It might not sit easily with standard ideas of military leadership, but understanding what happened to General Dallaire and his mission to Rwanda is crucial to understanding the moral minefields our peacekeepers are forced to negotiate when we ask them to step into the world’s dirty wars.

Excerpt from Shake Hands with the Devil
'My story is not a strictly military account nor a clinical, academic study of the breakdown of Rwanda. It is not a simplistic indictment of the many failures of the UN as a force for peace in the world. It is not a story of heroes and villains, although such a work could easily be written. This book is a cri de coeur for the slaughtered thousands, a tribute to the souls hacked apart by machetes because of their supposed difference from those who sought to hang on to power. . . . This book is the account of a few humans who were entrusted with the role of helping others taste the fruits of peace. Instead, we watched as the devil took control of paradise on earth and fed on the blood of the people we were supposed to protect.'"

Read also the story of a surviving girl:
Ilibagiza, Immaculée with Erwin, Steve "Left to Tell: Discovering God Amidst the Rwandan Holocaust" - 2006
Roméo Dallaire has also written a second book "They Fight Like Soldiers, They Die Like Children" where he "provides an emotionally daring and intellectually enlightening introduction to the child soldier phenomenon, as well as concrete solutions for its total eradication." I have read it in the meantime and thought it was also brilliant.
Posted by Marianne at 14:54