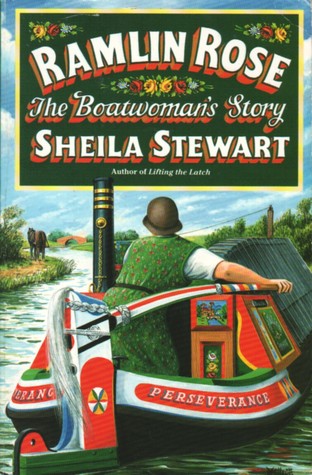 "Drawing on extensive interviews with boatwomen born and bred on the Oxford canal, this book is a story of courage and resilience, capturing a vanished way of life. From the turn of the century to the late 1950s, horse-drawn narrow boats were a familiar sight on Britain's canals."

When I lived in England, I was a member of the local W.I. (Women's Institute). We had talks about different topics every month. For me, one of the most exciting was when author Sheila Stewart came to see us. She talked about her life as an author, how she had started writing. She was a very interesting person and her then pretty new book sounded interesting, so I bought and read it.

This book tells the story of women whose story is never told, women who were born and raised on the narrowboats on the English canals and who then also had children and raised them there. Most of them had seen a school only from the outside, none of them could read or had a link to the outside world. Sheila Stewart had written another book "Lifting the Latch" about rural life in general and the life or a farm worker in particular. The man she interviewed mentioned the women and families living on the narrowboats and so Sheila started her investigation. She interviewed several boatwomen and then put them together in one character. I found it especially interesting that the women had almost no concept of time because they couldn't read. We'll never know what we would be without books.

What an interesting account of an unusal life we hardly ever hear about. Her writing style is both informative and exciting. It was so realistic, I felt I really knew the characters. And, even though those women led a hard life, the story contained quite a bit of humour, as well. I loved this book same as "Lifting the Latch" which I read later.

"From the turn of the century to the late 1950s, horse-drawn narrow boats were a familiar sight on Britain's canals. Carrying a wide variety of cargoes to such destinations as the Potteries, the textile mills of Lancashire, the papermills of London, the colleges of Oxford, they struggled on against increasing competition from rail and road traffic to maintain their place in the country's economy. Yet, little has been recorded about the lives of the canal families, and in particular, the women."
Posted by Marianne at 14:00