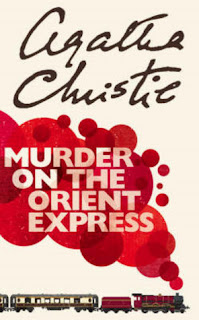 Who hasn't watched "Murder on the Orient Express"? I know I have watched it about a hundred times. First with Albert Finney as Monsieur Poirot, then Alfred Molina, then THE Hercule Poirot, David Suchet, and last but definitely not least, the great Kenneth Branagh.

So, I thought it was about time that I read the book. All those films I watched are all slightly different and I always wondered which one was closest to the book. Well, they all left something out or changed who said what or even who was who. But they are all close to the book. Agatha Christie had a huge imagination and this novel shows us again how wonderful her stories are.

"Just after midnight, the famous Orient Express is stopped in its tracks by a snowdrift. By morning, the millionaire Samuel Edward Ratchett lies dead in his compartment, stabbed a dozen times, his door locked from the inside. One of his fellow passengers is the murderer.

Isolated by the storm and with a killer in their midst detective Hercule Poirot must find the killer among a dozen of the dead man's enemies, before the murderer decides to strike again …"