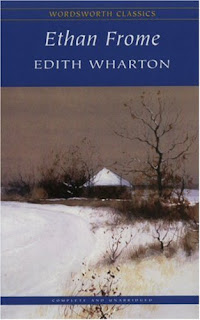 The starter book for "Six Degrees of Separation" for December is "Ethan Frome". Often, I haven't read the starter book or even heard of it. But I have read and liked "The House of Mirth", so I decided I could read this one, especially since it's just a novella, so I could read it in between.

A good story about life under harsh circumstances about a century ago. I am sure this could have been a good chunky story, as well, but the author decided to keep it short. And for once, I didn't even mind that much.

I probably should read more by Edith Wharton. Any recommendations?

"With this intensely moving short novel, Edith Wharton set out 'to draw life as it really was' in the lonely villages and desolate farms of the harsh New England mountains. Through the eyes of a visitor from the city, trapped for a winter in snowbound Starkfield, readers glimpse the hidden histories of this austere and beautiful land. Piecing together the story of monosyllabic Ethan Frome, his grim wife, Zeena, and Mattie Silver, her charming cousin, Wharton explores psychological dead-lock: frustration, longing, resentment, passion.

First published in 1911, the novella stunned its public with its consummate handling of the unfolding drama, and has remained for many readers the most compelling and subtle of all Wharton's fiction."