Mantel, Hilary "The Mirror and the Light" 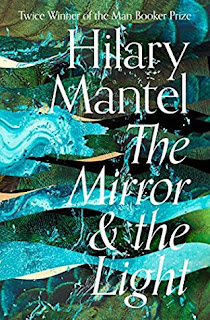 I have read both "Wolf Hall" as well as "Bring up the Bodies" by Hilary Mantel and I couldn't wait for the third book in the Wolf Hall Trilogy.

Well, knowing how the book ends didn't add to my enjoyment on the book, probably on the contrary. I am not surprised, the author didn't get the Booker Prize for this third book in the series (although it was longlisted) because I have the feeling, Hilary Mantel was dreading it as much as the reader did.

It starts with a lot of repetition, not as in someone is retelling the whole story but Cromwell more or less reliving the execution of Anne Boleyn, more or less a pre-shadow of the end of his own life.

I think we have all come to like Thomas Cromwell in the first two books, as opposed to what many historians try to tell us. Maybe it's good to recognize that not everyone in history was the way they have been portrayed. If any book teaches us this, "Wolf Hall" is the right one for that.

However, just as in the first two books, the writing was fantastic. The author managed to catch our attention, maybe not from the very first page but certainly soon thereafter. The Tudors always get there.

What surprised me most was how quick the fall from grace took place and how swiftly everyone stood there to see it and help bringing it to an end. You would have thought something really bad had happened, but no, just a few words here or there that are twisted in your mouth and you're a traitor. Incredible.

I would have liked a list of all the characters at the end, as I always find that useful in any historical book, fiction or non-fiction.

Now that Cromwell's life is over, I wonder who Hilary Mantel is going to write about next.

"England, May 1536. Anne Boleyn is dead, decapitated in the space of a heartbeat by a hired French executioner. As her remains are bundled into oblivion, Thomas Cromwell breakfasts with the victors. The blacksmith’s son from Putney emerges from the spring’s bloodbath to continue his climb to power and wealth, while his formidable master, Henry VIII, settles to short-lived happiness with his third queen before Jane dies giving birth to the male heir he most craves.

Cromwell is a man with only his wits to rely on; he has no great family to back him, no private army. Despite rebellion at home, traitors plotting abroad and the threat of invasion testing Henry’s regime to the breaking point, Cromwell’s robust imagination sees a new country in the mirror of the future. But can a nation, or a person, shed the past like a skin? Do the dead continually unbury themselves? What will you do, the Spanish ambassador asks Cromwell, when the king turns on you, as sooner or later he turns on everyone close to him?

With The Mirror & the Light, Hilary Mantel brings to a triumphant close the trilogy she began with Wolf Hall and Bring Up the Bodies. She traces the final years of Thomas Cromwell, the boy from nowhere who climbs to the heights of power, offering a defining portrait of predator and prey, of a ferocious contest between present and past, between royal will and a common man’s vision: of a modern nation making itself through conflict, passion, and courage."

One of my blogger friends (Brona from Brona's Books) organized a read-along here.