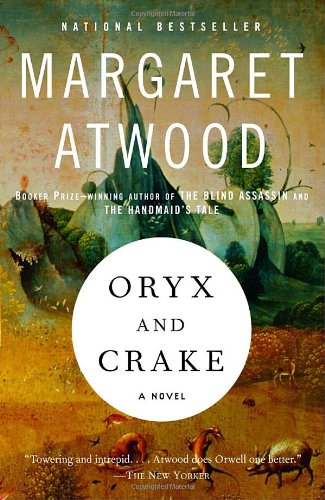 This story is about a genetic engineering world where the plan to destroy humanity through "medication" is almost successful. The "Children of Crake" who are supposed to replace humans are more like children, they remind me of the Eloi in "The Time Machine" by H.G. Wells. Just as innocent, just as naïve.

I hope I won't be around to see the world change that much but if we carry on like that, I might. In the meantime, let as many people read these kinds of books and hopefully see that we need to try to save this planet as long as it's still possible.

"With the same stunning blend of prophecy and social satire she brought to her classic The Handmaid's Tale, Margaret Atwood gives us a keenly prescient novel about the future of humanity and its present.

Humanity here equals Snowman, and in Snowman's recollections Atwood re-creates a time much like our own, when a boy named Jimmy loved an elusive, damaged girl called Oryx and a sardonic genius called Crake. But now Snowman is alone, and as we learn why we also learn about a world that could become ours one day."

Margaret Atwood was shortlisted for the Booker Prize for "Oryx and Crake" in 2003.

Margaret Atwood received the Peace Prize of the German Book Trade (Friedenspreis) in 2017.
Posted by Marianne at 11:14