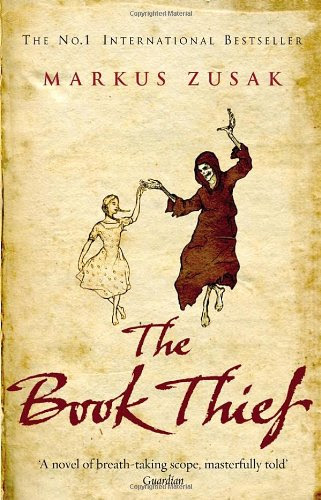 This was really a success in our book club. Most of the members loved it, only one said she couldn't get into it easily, the other one didn't like certain parts, e.g. Death as a narrator.

From the beginning: This is the story of a little girl in Nazi Germany. Her parents have been taken away and she grows up with foster parents. Liesel, the little girl, steals books, makes incredible friendship, but the most important part, Death tells the story. An account of little girls growing up, Nazis, Jews, theft, death but most of all, a lot of hope. A warm story, real people dealing with devastating events. We were all deeply touched by it.

One point our members brought up that I didn't see as being German myself, the author managed to draw a picture of the ordinary German people, the non-Nazis. It was good to see another side of the war. People in Germany suffered the same as the people in other countries. They liked the description of that side of the Germans. This novel brought up "cultural memories", it's a secondary story, a story about the losers of the war.

I liked Death as the narrator, I think the author gave death a human face. Now we can compare humans and death, see a picture that is more innocent.

Zusak captures the personalities of all the characters very well, good or bad, he makes them very believable.

All in all, a very interesting book, easy to read (it is officially a young adult novel), yet very deep.

We discussed this in our book club in January 2011.

From the back cover:
"It’s just a small story really, about among other things: a girl, some words, an accordionist, some fanatical Germans, a Jewish fist-fighter, and quite a lot of thievery. . . .
Set during World War II in Germany, Markus Zusak’s groundbreaking new novel is the story of Liesel Meminger, a foster girl living outside of Munich. Liesel scratches out a meager existence for herself by stealing when she encounters something she can’t resist - books. With the help of her accordion-playing foster father, she learns to read and shares her stolen books with her neighbors during bombing raids as well as with the Jewish man hidden in her basement before he is marched to Dachau.
This is an unforgettable story about the ability of books to feed the soul."
Posted by Marianne at 16:30