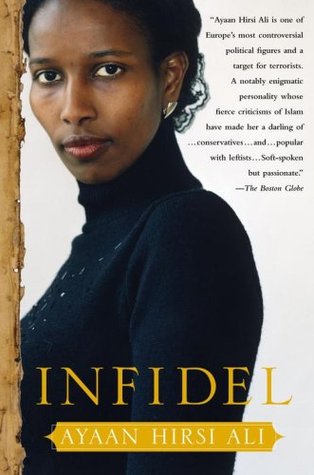 I had suggested this book to our book club because we live in the Netherlands and would like to get a little more information about the topic, actual present Dutch politics, something going on at the moment while we live here, I always wanted to read something like that.

We all thought it was a very interesting book and it led to a lively discussion about religion, women's rights, different lives in different countries and other books about these topics. We were surprised about the way Dutch people think about this.

We didn't find there were any new views about the politics here in this country. The question came up how much the Muslims would have to adjust in our countries.

There will always be people with prejudices. We have to change our minds if we want to understand the Islamic world. And we have to change them through moderate ways, Europe hasn't changed in a couple of years, it took a long time. Kader Abdolah (an Iranian-Dutch writer) says: "We Muslims in Europe have to stop importing imams from Muslim countries. We shouldn't forget that the consequences in breaking the rules are not the same as in Christianity."

The author had an interesting childhood. We were astonished how well-educated people in Somalia live to the Islamic rules. Also, the difference between towns and villages was very well documented - and the problems growing up as a girl.

Hirsi Ali also mentions how difficult it was to stir up people, to make them aware of the problems. The book shows how easy it is to manipulate people.

In some ways the book was depressing but we found a glimmer of hope in it. It is difficult when you see so much pain. We should enforce women's rights. Islam needs to be pulled up to modern standards. Ayaan Hirsi Ali had the courage to stand up for something so fearful. Education is the key.
We did think it was sad that she lost God but she is still young. We hope she finds him again. The difference between poor and rich is a battle between religions. God's word is above human love but we don't always see it that way.

As we saw in this book, great privilege comes with great responsibility. If you are from another background you say something and people think it's different. When we came here, we thought the Netherlands is a free country with open-minded inhabitants. Some areas, especially in the Amsterdam/Rotterdam area are just populated by a lot of immigrants.

We all agreed that Ayaan Hirsi Ali is so extraordinary, remarkable, a fantastic person. She lived in different countries, times, systems. We all hope she doesn't get assassinated, the Islam needs her.

I would recommend this book to anybody who is interested in understanding Muslims and who would like to work towards a better world for all of us.

We discussed this in our book club in March 2008.

From the back cover: "
In this profoundly affecting memoir from the internationally renowned author of "The Caged Virgin", Ayaan Hirsi Ali tells her astonishing life story, from her traditional Muslim childhood in Somalia, Saudi Arabia, and Kenya, to her intellectual awakening and activism in the Netherlands, and her current life under armed guard in the West. One of today's most admired and controversial political figures, Ayaan Hirsi Ali burst into international headlines following an Islamist's murder of her colleague, Theo van Gogh, with whom she made the movie "Submission".

"Infidel" is the eagerly awaited story of the coming of age of this elegant, distinguished -- and sometimes reviled -- political superstar and champion of free speech. With a gimlet eye and measured, often ironic, voice, Hirsi Ali recounts the evolution of her beliefs, her ironclad will, and her extraordinary resolve to fight injustice done in the name of religion. Raised in a strict Muslim family and extended clan, Hirsi Ali survived civil war, female mutilation, brutal beatings, adolescence as a devout believer during the rise of the Muslim Brotherhood, and life in four troubled, unstable countries largely ruled by despots. In her early twenties, she escaped from a forced marriage and sought asylum in the Netherlands, where she earned a college degree in political science, tried to help her tragically depressed sister adjust to the West, and fought for the rights of Muslim immigrant women and the reform of Islam as a member of Parliament. Even though she is under constant threat -- demonized by reactionary Islamists and politicians, disowned by her father, and expelled from her family and clan -- she refuses to be silenced.

Ultimately a celebration of triumph over adversity, Hirsi Ali's story tells how a bright little girl evolved out of dutiful obedience to become an outspoken, pioneering freedom fighter. As Western governments struggle to balance democratic ideals with religious pressures, no story could be timelier or more significant."

Ayaan Hirsi Ali continues her story in  "Nomad: From Islam to America: A Personal Journey Through the Clash of Civilizations"

See also "Murder in Amsterdam: The Death of Theo Van Gogh and the Limits of Tolerance" by Ian Buruma
Posted by Marianne at 18:16