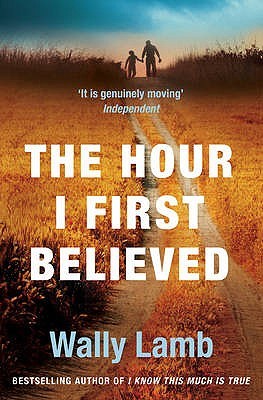 Columbine High School, Littleton, Colorado, 1999. Caelum Quirk is a teacher at that school, his wife works there as a school nurse. He is in Connecticut visiting his aunt after her stroke while his wife hides in the school hoping not to be killed by the two students to are out on a warpath.

This book is not about those unfortunate students and teachers that were killed on that terrible day, it is about those "lucky" enough to survive, those that got away. Looking at the life those people led after the attack, one could almost wish to die in such an event. Even though the day is described, the shootings aren't too detailed, the author doesn't linger on every detail, this is not a horrendous thriller that likes to show gruesome deeds.

This is my third Wally Lamb book and I have loved all of them. The author always finds a great way to describe people's feelings, little by little he dissects any situation. I love his style. He has a great way of telling a story. Some critic called him a modern day Dostoevsky, certainly a great praise but not too great for this fantastic storyteller, a good psychologist. There is so much humanity in this book, so even though a lot of negative events happen, it still is a book of hope and love. The characters are very human, not overdone, realistic. We also learned that people are a product of their circumstances, especially if one thing follows another.

The novel isn't just about Columbine and the shooting, it combines so many other topics, Wally Lamb could have made the material into three books. It was great to read about these characters who always try to get up after falling down. I thoroughly enjoyed this very descriptive book.

The question came up what we thought it was that he "first believed in"? There were several who opted for "Hope", others for "God". The Dutch title "Vleugelslag" (wing stroke) alludes to the butterfly effect.

"From the author of the international number one bestseller I KNOW THIS MUCH IS TRUE comes a magnificent novel of a life turned upside-down by tragedy – and the search for a way to carry on in the aftermath.

Caelum Quirk is a middle-aged schoolteacher. Students at Columbine High School generally respect him and turn to his wife Maureen, the school nurse, when in trouble. When he has to return to his home town for the funeral of his beloved aunt, Maureen promises to join him the next day - but she goes to work that morning, and that’s when the shootings happen. She hides in a cupboard, unable to see what’s happening, but listening to the students being taunted, then killed.

Life can never be the same again. In the face of Maureen’s trauma, Caelum searches for meaning, delving into his own family history and discovering that nothing was as he’s always been told. As the couple inch towards recovery and suffer setbacks, the stories of Caelum’s redoubtable ancestors illuminate how he came to be the man he is, and how he and Maureen might live in the future with freedom and dignity. With no easy answers, Caelum gradually comes to an understanding of who he really is and what he can believe in."

My first ever Wally Lamb: "She's Come Undone"
I have also read "I know this much is true" and his next books, find the reviews here.
Posted by Marianne at 19:51