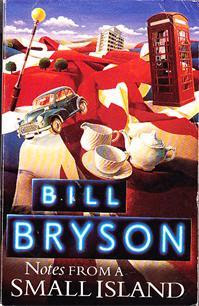 This was my first experience with Bill Bryson, I read it with my British book club in the last year before I was leaving this "Small Island", so beloved both by the other and myself. I fell in love with his humour and writing style right away. Sooo hilarious.

You can tell Bill Bryson loves the UK and its people, he knows their habits, their humour (especially their great humour), their towns and their countryside, their history and their present politics.

I have read quite a few Bryson books in the meantime, including some great books about the English history, however, this one remains my favourite.

We discussed this in our British Book Club in December 1999.

From the back cover:
"After nearly two decades spent on British soil, Bill Bryson - bestselling author of The Mother Tongue and Made in America - decided to return to the United States. ('I had recently read,' Bryson writes, 'that 3.7 million Americans believed that they had been abducted by aliens at one time or another, so it was clear that my people needed me.') But before departing, he set out on a grand farewell tour of the green and kindly island that had so long been his home.

Veering from the ludicrous to the endearing and back again, Notes from a Small Island is a delightfully irreverent jaunt around the unparalleled floating nation that has produced zebra crossings, Shakespeare, Twiggie Winkie's Farm, and places with names like Farleigh Wallop and Titsey. The result is an uproarious social commentary that conveys the true glory of Britain, from the satiric pen of an unapologetic Anglophile."

I love all of Bill Bryson's books. Find a link to my reviews here.
Posted by Marianne at 20:18