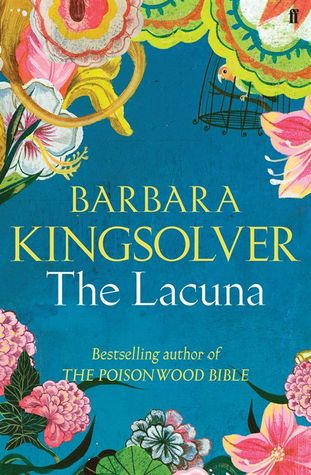 Another great novel by Barbara Kingsolver. This one stretches from Mexico over the United States to Russia, describes the lives of Mexican painters Diego Rivera and Frida Kahlo an Russian leader Trotsky, all woven together by the life of one Mexian-American guy who is thrown into their lot.

Wonderful book about politics (especially the evil side of it), prejudices, art, love - and cooking.
This certainly is one of my new favourites.

I have also read other books by Barbara Kingsolver, you can find my reviews here.

"In her most accomplished novel, Barbara Kingsolver takes us on an epic journey from the Mexico City of artists Diego Rivera and Frida Kahlo to the America of Pearl Harbor, FDR, and J. Edgar Hoover. 'The Lacuna' is a poignant story of a man pulled between two nations as they invent their modern identities.

Born in the United States, reared in a series of provisional households in Mexico - from a coastal island jungle to 1930s Mexico City - Harrison Shepherd finds precarious shelter but no sense of home on his thrilling odyssey. Life is whatever he learns from housekeepers who put him to work in the kitchen, errands he runs in the streets, and one fateful day, by mixing plaster for famed Mexican muralist Diego Rivera. He discovers a passion for Aztec history and meets the exotic, imperious artist Frida Kahlo, who will become his lifelong friend. When he goes to work for Lev Trotsky, an exiled political leader fighting for his life, Shepherd inadvertently casts his lot with art and revolution, newspaper headlines and howling gossip, and a risk of terrible violence.

Meanwhile, to the north, the United States will soon be caught up in the internationalist goodwill of World War II. There in the land of his birth, Shepherd believes he might remake himself in America's hopeful image and claim a voice of his own. He finds support from an unlikely kindred soul, his stenographer, Mrs. Brown, who will be far more valuable to her employer than he could ever know. Through darkening years, political winds continue to toss him between north and south in a plot that turns many times on the unspeakable breach--the lacuna--between truth and public presumption.

With deeply compelling characters, a vivid sense of place, and a clear grasp of how history and public opinion can shape a life, Barbara Kingsolver has created an unforgettable portrait of the artist--and of art itself. 'The Lacuna' is a rich and daring work of literature, establishing its author as one of the most provocative and important of her time."
Posted by Marianne at 20:57