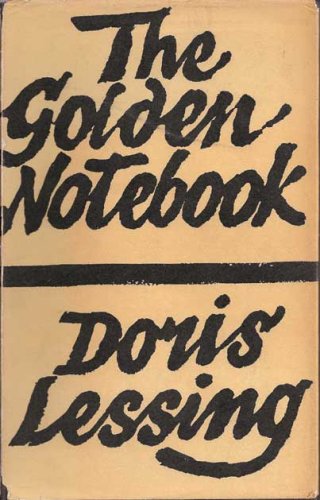 It has been ages since I read "The Golden Notebook", probably shortly after it was published. It is one of those books that I still remember after many many years. I thought it was very good and very sensitive, approached the subject of women's liberation in a very unique but helpful way.

When we discussed this in our book club, most members did not really like the book very much. A few of us "older" members had the feeling that the younger readers couldn't really follow the reasons this book was written for, they had not lived during the time where a girl "did not need an education because she would get married anyway". Ladies like Doris Lessing and her characters are responsible that the situation isn't as bad any more, at least not in our part of the world.

From the back cover:
"Anna is a writer, author of one very successful novel, who now keeps four notebooks. In one, with a black cover, she reviews the African experience of her earlier year. In a red one she records her political life, her disillusionment with communism. In a yellow one she writes a novel in which the heroine reviles part of her own experience. And in the blue one she keeps a personal diary. Finally, in love with an American writer and threatened with insanity, Anna tries to bring the threads of all four books together in a golden notebook.

Doris Lessing's best-known and most influential novel, The Golden Notebook retains its extraordinary power and relevance decades after its initial publication."

Doris Lessing "that epicist of the female experience, who with scepticism, fire and visionary power has subjected a divided civilisation to scrutiny" received the Nobel Prize for Literature in 2007.

We discussed this in our book club in January 2009.

I contribute to this page: Read the Nobels and you can find all my blogs about Nobel Prize winning authors and their books here.
Posted by Marianne at 19:09