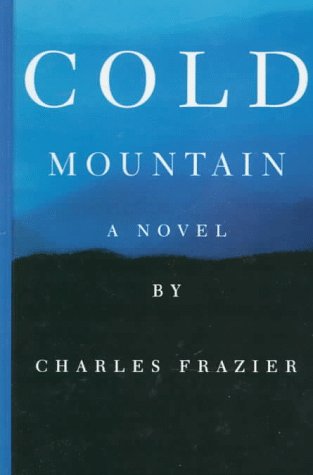 "Based on local history and family stories passed down by the author's great-great-grandfather, Cold Mountain is the tale of a wounded soldier Inman, who walks away from the ravages of the war and back home to his prewar sweetheart, Ada. Inman's odyssey through the devastated landscape of the soon-to-be-defeated South interweaves with Ada's struggle to revive her father's farm, with the help of an intrepid young drifter named Ruby. As their long-separated lives begin to converge at the close of the war, Inman and Ada confront the vastly transformed world they've been delivered."

I have read this book twice, the first time with my British book club when it was just published and then again when the movie came out and I wanted to get into it again before watching it. I was not happy with the ending the first time round, well, I didn't really get it but the second time it made sense and I liked it better.

This is a book about the American Civil War, about love, struggles in bad times, companionship. But it doesn't just show the life of people during the Civil War, it seems to be a never ending description of life. I think it is a great novel that will live on and be read for generations.

All in all, "Cold Mountain" fantastic, the movie was very good, too, I rarely say that after I read a book, really worth watching, whether you've read the book or not.

This was his book about the Civil War, his second book "Thirteen Moons", dates earlier, it has a lot about the Indians (or Native Americans as they are called now but in the book they were called Indians because that was the term at the time). I love reading any books that bring history or other cultures into my life, I can really recommend his books.

Have read the next book by this extraordinary author. "Nightwoods". Charles Frazier is amazing.
Posted by Marianne at 21:15