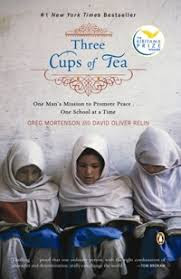 I read this with my book club.

Greg Mortenson gets lost on his way back from K2. He reaches a tiny little village in Pakistan and meets the most helpful people in the world. He see the conditions they live in and promises to come back and build them a school. He keeps his promise and carries on to build more than 50 schools in Pakistan and Afghanistan.

This book is about his way from being a carefree single mountaineer to a family father who spends a lot of time helping people in remote corners of the world who get help from nobody.

What a guy. My admiration for Greg Mortenson climbed with every page I read. I would love to meet him - and his wife. The achievements just one guy can reach, it's unbelievable. This story shows how people can change the world, can contribute to make the living conditions of others better. Not all of us will be able to climb K2 (or any other large mountain) but the author shows us that there is always a goal that you can try to achieve, a mountain to conquer.

The description of all the pitfalls are heart rendering but him overcoming them makes you hope for a better future. If the world were full of Greg Mortensons - what a world that would be.

I also loved his admiration of the local people, his ability to tune into their culture and language. Okay, he does have an ear for languages but he is willing to understand his "neighbour", no matter how far away he lives.
I also admire his wife. She deserves some kind of medal.

Needless to say, I love this book. It was chosen as the favourite of our book club reads that year.

We discussed this in our book club in May 2009.

From the back cover: "Anyone who despairs of the individual’s power to change lives has to read the story of Greg Mortenson, a homeless mountaineer who, following a 1993 climb of Pakistan’s treacherous K2, was inspired by a chance encounter with impoverished mountain villagers and promised to build them a school. Over the next decade he built fifty-five schools - especially for girls - that offer a balanced education in one of the most isolated and dangerous regions on earth. As it chronicles Mortenson’s quest, which has brought him into conflict with both enraged Islamists and uncomprehending Americans, Three Cups of Tea combines adventure with a celebration of the humanitarian spirit."

We discussed Greg Mortenson's second book "Stones into Schools: Promoting Peace with Books, Not Bombs, in Afghanistan and Pakistan" in our book club in April 2011.
Posted by Marianne at 17:24