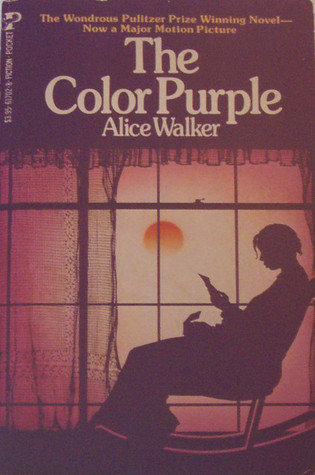 This is one of the best stories I have ever read. They story of a woman who seems to have no rights whatsoever and manages to get out of the hell she lives in with the help of others but mainly by being very strong herself. Alice Walker received the well-deserved Pulitzer price for this in 1983.

If you haven't read this book you certainly have heard about it or watched the movie (which is also very good, by the way). The story includes everything, joy and pain, family, religion, violence, rape, destruction, resurrection, racism, poverty.

The book starts when the main character, Celie, is fourteen. She lives with her mother, sister and stepfather. She is treated badly, ends in a bad marriage where she is treated even worse and nothing seems to be good for her, ever.

I liked the way Celie developed from a little girl into a strong, independent woman, the love for her sister, her search for her children. She seems a very likeable person who has to endure so much and always stands up again.

Apparently, Alice Walker used a lot of her own life in this novel, described personal experience. Maybe that's the reason it seems so true. She also wrote sort of a sequel "The Temple of My Familiar", if you liked "The Color Purple", you will love this one, as well.

A very interesting read about Alice Walker's life: "The Way Forward is with a Broken Heart".

Alice Walker received the Pulitzer Prize for "The Color Purple" in 1983.

From the back cover: "Celie is a poor black woman whose letters tell the story of 20 years of her life, beginning at age 14 when she is being abused and raped by her father and attempting to protect her sister from the same fate, and continuing over the course of her marriage to "Mister," a brutal man who terrorizes her. Celie eventually learns that her abusive husband has been keeping her sister's letters from her and the rage she feels, combined with an example of love and independence provided by her close friend Shug, pushes her finally toward an awakening of her creative and loving self."
Posted by Marianne at 18:17