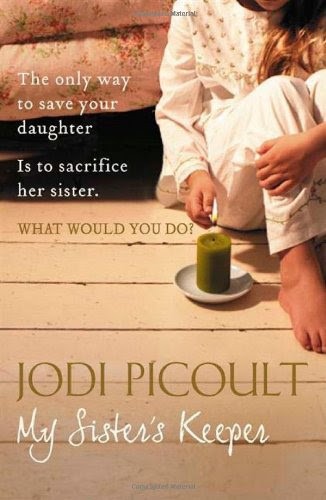 A novel about designer babies. Interesting topic, one should think. So much can be said about this. Well, let me just say, not my kind of book. It was generally classified by our book club members as "beach read" and I don't enjoy those. All of us would have liked to see the topic explored a little deeper than that. The end was the easy way out. We also found that the author could have examined the characters better and got them a bit more three-dimensional. We had hoped for a deeper discussion about the topic.

Apparently, a typical Jodi Picoult (which makes one less author of whom I will have to read the next book).

In this book, a family "designs" a new baby in order to save another child from dying. Even though you can see the heartache and we could get into the shoes of the mother, we found her character very unlikeable, very rough. For her, this other daughter was just a “spare parts” child. The question is: What would you be willing to do in order to save your children? Is it ethical to have designer babies?

The style was not unique, but interesting, every single character told their own story, some of us found that distracting, I quite enjoyed it.

We discussed this in our book club in February 2009.

"Anna is not sick, but she might as well be. By age thirteen, she has undergone countless surgeries, transfusions, and shots so that her older sister, Kate, can somehow fight the leukemia that has plagued her since childhood. The product of preimplantation genetic diagnosis, Anna was conceived as a bone marrow match for Kate -- a life and a role that she has never challenged... until now. Like most teenagers, Anna is beginning to question who she truly is. But unlike most teenagers, she has always been defined in terms of her sister—and so Anna makes a decision that for most would be unthinkable, a decision that will tear her family apart and have perhaps fatal consequences for the sister she loves.
A provocative novel that raises some important ethical issues, My Sister's Keeper is the story of one family's struggle for survival at all human costs and a stunning parable for all time."
Posted by Marianne at 15:00