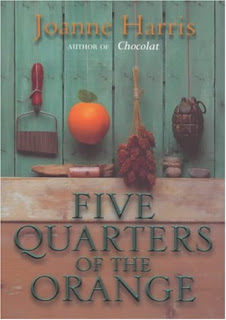 The story of the family, the history, the main character trying to come to terms with everything that happened in her past.

This book has a lot of issues, history, recipes, family tragedy, mother-daughter relationship, description of small village life, even though in France, I think this applies to anywhere in the world.

I liked this book better than "Chocolat"  though I think I just expected too much of that one because of all the praise it received at the time. I also read "Coastliners", and "Blackberry Wine".

We discussed this in our book club in February 2003.

"Returning to the small Loire village of her childhood, Framboise Dartigen is relived when no one recognizes her. Decades earlier, during the German occupation, her family was driven away because of a tragedy that still haunts the town.

Framboise has come back to run a little cafe serving the recipes her mother recorded in a scrapbook. But when her cooking receives national attention, her anonymity begins to shatter. Seeking answers, Framboise begins to see ther her mother's scrapbook is more than it seems. Hidden among the recipes for crepes and liquors are clues that will lead Framboise to the truth of long ago."

Read more about her other books here.
Posted by Marianne at 17:59