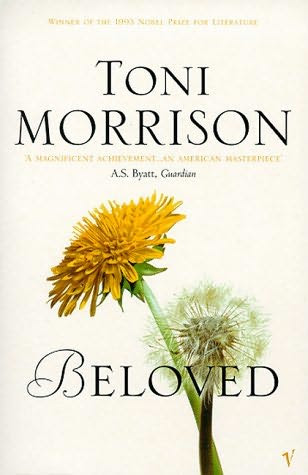 This is one of my favourite books ever. The author uses a lot of symbolism unknown to us, yet, explains the world of the slaves so lively, you can really feel their pains. It covers love, friendship, life in a community, describes how different people cope with the same problem and gives you a lot to think about.

It has also been made into a fantastic movie - and I don't say that very often about books made into film.

From the back cover: "It is the mid-1800s. At Sweet Home in Kentucky, an era is ending as slavery comes under attack from the abolitionists. The worlds of Halle and Paul D. are to be destroyed in a cataclysm of torment and agony. The world of Sethe, however, is to turn from one of love to one of violence and death - the death of Sethe's baby daughter Beloved, whose name is the single word on the tombstone, who died at her mother's hands, and who will return to claim retribution. Beloved is a dense, complex novel, mixing past and present, destined to become a twentieth-century American classic."

Toni Morrison "who in novels characterized by visionary force and poetic import, gives life to an essential aspect of American reality" received the Nobel Prize for Literature in 1993 and the Pulitzer Prize for "Beloved" in 1988.

Read more about other books by the author here.

I contribute to this page: Read the Nobels and you can find all my blogs about Nobel Prize winning authors and their books here.
Posted by Marianne at 13:44