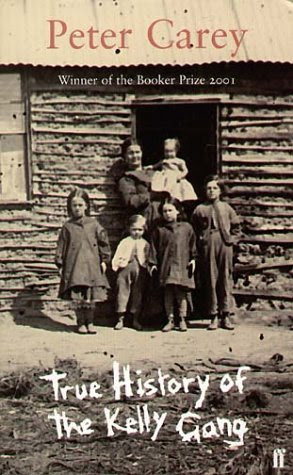 Not being from a Commonwealth country, I had never heard of the Kelly Gang before. When I saw this book, it looked interesting. And it was. The style is unique, the book has been written as if they are different scraps from letters or notes Kelly wrote to his daughter. I found the information about this part of the Australian history interesting, especially since it is said to be true.

The writing takes a little getting used to as he hardly uses any punctuation and isn't very careful with grammar and spelling either (as I said, as if written by the guy himself) and the language is quite colloquial (to put it mildly). But - that only adds to the beauty of the story.

I really liked this book.

From the back cover:
"'I lost my own father at 12 yr. of age and know what it is to be raised on lies and silences my dear daughter you are presently too young to understand a word I write but this history is for you and will contain no single lie may I burn in Hell if I speak false.'
In True History of the Kelly Gang, the legendary Ned Kelly speaks for himself, scribbling his narrative on errant scraps of paper in semiliterate but magically descriptive prose as he flees from the police. To his pursuers, Kelly is nothing but a monstrous criminal, a thief and a murderer. To his own people, the lowly class of ordinary Australians, the bushranger is a hero, defying the authority of the English to direct their lives. Indentured by his bootlegger mother to a famous horse thief (who was also her lover), Ned saw his first prison cell at 15 and by the age of 26 had become the most wanted man in the wild colony of Victoria, taking over whole towns and defying the law until he was finally captured and hanged. Here is a classic outlaw tale, made alive by the skill of a great novelist."

Peter Carey won the Booker Prize for "True History of the Kelly Gang" in 2001.

I also really enjoyed "Oscar and Lucinda" by the same author.
Posted by Marianne at 15:01