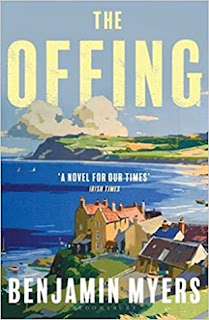 The latest "Favourite Book of the Independents" was announced and it was "The Offing". I had seen it in a bookshop and thought it sounded interesting but because my TBR pile keeps growing and growing, I hadn't bought it. This is the one time where I am glad that I can't borrow English books in my new home town because now I own it. It's definitely a keeper.

I'm glad this received the prize because so far, "Where the Crawdads Sing" (which had received last year's prize), had been my favourite book of the year. I think it has been replaced with this one.

Robert is only sixteen years old. He is to follow his dad as a coal miner, like every other young boy in his village in Durham in the Northern part of England. World War II has just ended and Robert wants to see a little from the world. Post-war England isn't exactly a dram but him being strong and many men missing, he finds jobs here and there and then carries on into the next village.

Until he hits the sea in Yorkshire and Dulcie's cottage. Dulcie is older, a lot older than Robert, lives alone but has had an interesting life. She shares her experience with the young foundling, gets him interested in literature and shows him that there is a lot more out there in life than what his village back home has to offer.

This is a brilliant book about so many things, England and Europe, the ocean, literature, poetry, the simple life, nature. He writes it as a sort of memoir from when he himself is old.

It already starts with a great quote: "For no one really wins a war: some just lose a little less than others." I don't understand how people don't get it.

To just show you his brilliant use of language, here's one of his nature descriptions.
"The land flowed forward now in a grassy tessellation of fields farmed and grazed, and divided by dusty tracks and densely packed tree-covered glades."

This book is just beautifully written. A fantastic example of great literature.

The author is from Durham himself. He has received many prestigious prizes already. I'll have to read more of his books.

"'After all, there are only a few things truly worth fighting for: freedom, of course, and all that it brings with it. Poetry, perhaps, and a good glass of wine. A nice meal. Nature. Love, if you're lucky.'

One summer following the Second World War, Robert Appleyard sets out on foot from his Durham village. Sixteen and the son of a coal miner, he makes his way across the northern countryside until he reaches the former smuggling village of Robin Hood’s Bay. There he meets Dulcie, an eccentric, worldly, older woman who lives in a ramshackle cottage facing out to sea. - and she introduces him to the pleasures of rich food, sea-swimming, sunburn and poetry. The two come from different worlds, yet as the summer months pass, they form an unlikely friendship that will profoundly alter their lives.

From the Walter Scott Prize-winning author of The Gallows Pole comes a powerful new novel about an unlikely friendship between a young man and an older woman, set in the former smuggling village of Robin Hood’s Bay in the aftermath of the Second World War."


"The Offing" has been chosen favourite book of the year 2020 by the German Indepent Bookshops.