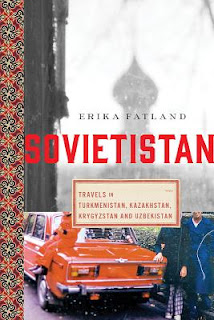 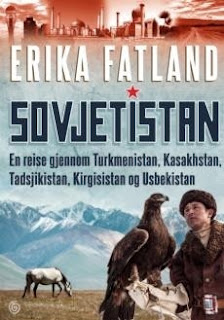 After reading "The Border" by this Norwegian author where she travels all around the Russian border and visits every adjoining country, I was eager to read her first book where she visited the Central Asian "Stans" who became independent after the break-up of the Soviet Union.

I was not disappointed. Erika Fatland seems like someone who really researches what she does. She speaks several languages, i.a. Russian which makes it easier but she still meets many people who don't speak any of the languages she knows. You can definitely tell she knows a lot about exploring other cultures. And it's interesting to read a woman's perspective about this part of the world, doesn't happen too often.

There is so much history in the part of the world, longer than the European one, definitely longer than any of the "new world" and this book makes us aware that we should always look at someone's history if we try to understand them. From the Mongolian invaders through the Russian Empire and then the Soviet Union, these countries have all had to endure a lot. It's not easy to go back to what we would call "normal democracy" in just one generation. Some of the countries seem to be on a better way than others but I'm sure it will still take a long time until all the inhabitants will be able to live a free life.

The author tells us about the Silk Road, the mountains and valleys, the rich cities of the past (like Samarkand, doesn't that name just conjure some dreamy 1001 night-like picture?). And the ethnic people who have inhabited this area for thousands of years. In telling her story where it fits in the historical parts she mentions, she gives us a good idea about how life in those countries seems to be. From old cultures like bride-stealing to the wealth brought through oil, there is a lot to take in

We hear about Genghis Khan and Amir Timur or Tamerlane, two Mongol conquerors, who influenced the region just as much as Stalin later on.

A while ago I read a book about the Hutterer (The Forgotten People) who came to Canada via this region and Erika Fatland also mentions the Mennonites who suffered the same fate, some of whom still occupy their area. It was interesting to compare these two religious' groups.

But those are not the only interesting people the traveller met. There are so many anecdotes about the people she met and how she often was welcomed with open arms.

There is this guy (Igor Savitsky, see here on Wikipedia) who founded a museum in the middle of nowhere, even in Uzbek standards, the State Art Museum of the Republic of Karakalpakstan, named after I.V. Savitsky, also known as Nukus Museum of Art or Savitsky Museum and the Desert of Forbidden Art.

Or she talks to human rights activists, people who live in the mountains without any electricity or anything else we all consider necessary to live a decent life. They don't and chose to live like that. Totally interesting.

As always, it was great to read about a part of the world we know so little about. Most Europeans would even be able to find the right countries on a map if questioned let alone name the capital cities. I've learned them now and hope to remember them:
Kazakhstan: Nur-Sultan, formerly Astana
Kyrgyzstan: Bishkek
Tajikistan: Dushanbe
Turkmenistan: Ashgabat
Uzbekistan: Tashkent

Granted, there are so many topics in this book, anthropology, communism, dictatorship, economy, ecology, human rights, politics, religion, sociology, you name it, everything that fits into human life is there, but it is still a highly pleasurable read.

I also really appreciated to see this world through the eyes of a woman. A woman who grew up in a free world and therefore would see more of the restrictions women in these countries have to live with than any man ever would. Well done, Erika!

This was our book club read in November 2020.

Some comments by the readers:

"Turkmenistan, Kazakhstan, Tajikistan, Kyrgyzstan, and Uzbekistan became free of the Soviet Union in 1991. But though they are new to modern statehood, this is a region rich in ancient history, culture, and landscapes unlike anywhere else in the world.

Traveling alone, Erika Fatland is a true adventurer in every sense. In Sovietistan, she takes the reader on a compassionate and insightful journey to explore how their Soviet heritage has influenced these countries, with governments experimenting with both democracy and dictatorships.

In Kyrgyzstani villages, she meets victims of the tradition of bride snatching; she visits the huge and desolate Polygon in Kazakhstan where the Soviet Union tested explosions of nuclear bombs; she meets shrimp gatherers on the banks of the dried out Aral Sea; she witnesses the fall of a dictator.

She travels incognito through Turkmenistan, a country that is closed to journalists. She meets exhausted human rights activists in Kazakhstan, survivors from the massacre in Osh in 2010, and German Mennonites that found paradise on the Kyrgyzstani plains 200 years ago. We learn how ancient customs clash with gas production and witness the underlying conflicts between ethnic Russians and the majority in a country that is slowly building its future in nationalist colors.

Once the frontier of the Soviet Union, life follows another pace of time. Amidst the treasures of Samarkand and the brutalist Soviet architecture, Sovietistan is a rare and unforgettable adventure."