Our topic for today would be Book Quotes (these could be quotes from books or quotes about books/reading). Since January 2013, I've been posting them every week and you can find a list of all the quotes I ever gathered here.
Also, we did a TTT about book quotes in September (see here).

So, I thought I'd search through the old themes and choose one of those that I missed.

Authors that Deserve More Recognition
There are a couple of authors that I count among my favourite ones but if I mention them, most people either say "I never read a book by them" or, even worse, "I have never heard of them". Therefore, I like this topic and hope that some of you will pick up at least one of their books: 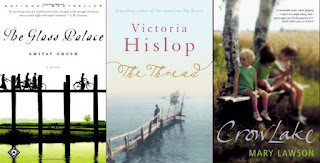 My favourite one by any of them is in the the pictures, you find all the other books I read by them in the link.

And which authors would you recommend?
Posted by Marianne at 10:12