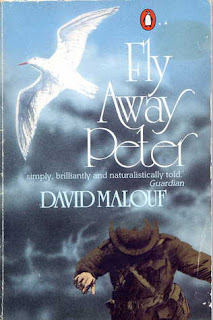 I belong to those people who think that the internet is fantastic. Granted, there are some downfalls, people try to make others feel bad just because they can and they know they won't get caught.

But I see the advantage. I have met many, many lovely people on the internet. First, in some chatrooms (remember chatrooms? Those were the days!), then on Facebook and other social networks, and at last here in the blog community. So many great people from all over the world.

One of those lovely people is Brona from Australia who published a list of Australian novellas a while ago. I asked her which one she said she'd recommend and she said "The Ladies of Missalonghi" by Colleen McCullough.

I ordered it but am still waiting for the copy to arrive. In the meantime, I asked another great Australian friend which one she would prefer and she recommended this one. And since that copy arrived faster, I started with this one.

I don't think David Malouf is much known in the Northern hemisphere. And what a loss. He seems to be a great author. This novella could have been a thousand pages long, I still would have loved it. Well, if you know my taste, I probably would have loved it even more. LOL. Although, that is hardly possible.

This is a great story about World War I. But not just that. We first meet Jim Sadler in Queensland where he is observing birds. The whole story is lined with birds but Jim soon gets to see parts of the world he probably would have liked not to visit. He is one of those soldiers that fight in Flanders fields. The difference between his two lives could not have been greater.

The author was born 1934, after the war ended and too early before the next war to have participated in it. But he must be a great listener because with this story he tells us how it was to lie in the trenches, to see comrades killed, you get such a good view about the war. A view you might rather not have. But it certainly helps to understand what war could mean.

This is a novella written for young adults/children. I agree with my friend there, who recommended this. It's required reading in Australia and she said she doubts that many kids are mature enough for it. I think it might be too much for some younger readers to cope with, as well. However, those that love reading and are interested in history, they might appreciate it. I would recommend it for anyone over 16.

While researching, I found this quote by the author.
"I knew that the world around you is only uninteresting if you can't see what is really going on. The place you come from is always the most exotic place you'll ever encounter because it is the only place where you recognise how many secrets and mysteries there are in people's lives".
I don't know about this. I always am more interested in other places and find the one I come from boring because I know all about it (or at least think I do).

"For three very different people brought together by their love for birds, life on the Queensland coast in 1914 is the timeless and idyllic world of sandpipers, ibises and kingfishers. In another hemisphere civilization rushes headlong into a brutal conflict. Life there is lived from moment to moment.

Inevitably, the two young men - sanctuary owner and employee - are drawn to the war, and into the mud and horror of the trenches of Armentieres. Alone on the beach, their friend Imogen, the middle-aged wildlife photographer, must acknowledge for all three of them that the past cannot be held."