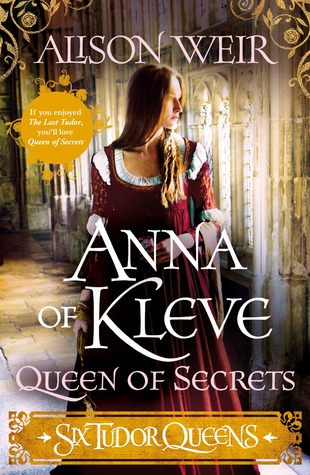 Weir, Alison "Six Tudor Queens. Anna of Kleve. Queen of Secrets" (US Title: The Princess in the Portrait) - 2019

Finally, it's the turn of the next of Henry's queens. Queen #4, the German queen.

I was looking forward to this, especially since I had just watched "The Tudors", a series that should really be called "Henry VIII" since it only portrays his life and everyone during his reign, nothing before or after (where we had four other Tudor kings and queens).

I quite liked Anna in the series and already had liked her in "The Six Wives of Henry VIII". Now I got to "know" her a little better.

Granted, Alison Weir took quite a few liberties with spinning this story into an interesting one, I wasn't too happy that she elaborated on some speculations as if they really had happened that way.

Anna had two children by a lover, only because Henry believes she wasn't a virgin when she got married.
***

But I suppose that's why they call it historial "fiction". Comparing the book to her other novels, I must say I did not enjoy this as much, mainly due to the made-up part. I now wonder how much she invented about the previous queens. She did lose a lot of her credibility.

Other than that, I loved how life both in Germany as well as in England was portrayed, how young Anna came to a foreign country without speaking the language and had to fear for her life when she noticed that she wasn't what the king wanted.

She must have been a strong woman to get through all of this and keep the king's love, something none of his other queens managed. Maybe Jane Seymour would have managed in the long run but we'll never know.

I still look forward to the next book in the series: "Katheryn Howard: The Tainted Queen".

Find my reviews of Alison Weir's other books here.


From the back cover:

"A GERMAN PRINCESS WITH A GUILTY SECRET.

The King is in love with Anna's portrait, but she has none of the accomplishments he seeks in a new bride.

She prays she will please Henry, for the balance of power in Europe rests on this marriage alliance.
But Anna's past is never far from her thoughts, and the rumours rife at court could be her downfall. Everyone knows the King won't stand for a problem queen.

ANNA OF KLEVE THE FOURTH OF HENRY'S QUEENS

Acclaimed, bestselling historian Alison Weir draws on new evidence to conjure a startling image of Anna as you've never seen her before. A charming, spirited woman, she was loved by all who knew her - and even, ultimately, by the King who rejected her.

History tells us she was never crowned. But her story does not end there."

Newly widowed and the father of an infant son, Henry VIII realizes he must marry again to insure the royal succession. Now forty-six, overweight and unwell, Henry is soundly rejected by some of Europe’s most eligible princesses, but Anna of Kleve - a small German duchy - is twenty-four and eager to wed. Henry requests Anna’s portrait from his court painter, who enhances her looks, painting her straight-on in order not to emphasize her rather long nose. Henry is entranced by the lovely image, only to be bitterly surprised when Anna arrives in England and he sees her in the flesh. She is pleasant looking, just not the lady that Henry had expected.

What follows is a fascinating story of this awkward royal union that had to somehow be terminated tactfully. Alison Weir takes a fresh and surprising look at this remarkable royal marriage by describing it from the point of view of Queen Anna, a young woman with hopes and dreams of her own, alone in a royal court that rejected her from the day she arrived."

I'm also a little annoyed with the book itself. I ordered it and received an edition that is totally different from the others that I already have although there is one that would fit in the series. I probably should have checked better before reviewing this but it still is annoying that there are always so many different covers around - even in the same country.

The cover I have looks a little more like chick lit. This would be the one that fits into my collection:
Posted by Marianne at 11:27