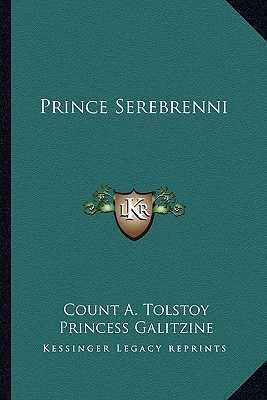 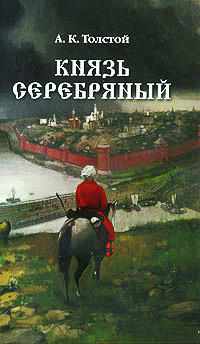 Tolstoy, Aleksey Konstantinovich "Prince Serebrenni: An Historical Novel of the Times of Ivan the Terrible and of the Conquest of Siberia" (aka The Silver Knight or The Silver Prince) (Russian: Князь Серебряный/Knjaz' Sserebrjanyi) - 1882

I don't think I would have ever come across this novel, had it not been for a new reading club, started by an enthusiastic reader who wanted to talk about Esperanto literature. But, from time to time, we also want to read a translation that is otherwise not as widely known.

Not only had I never heard of the book (even though it has been translated into both English and German), I also hadn't the slightest idea about the author. Apparently, he was a second cousin of Leo Tolstoy, an author I do admire a lot.

I wouldn't compare this novel to those of Leo Tolstoy, they almost seem like a different generation, even though they were born only 11 years apart. Same as his cousin, this Tolstoy served in the Crimean War.

Probably a good thing that Ivan the Terrible was dead by the time this book was published, I doubt the author would have survived it. The main reason, this could be published at all was probably because people were more aware of justice and injustice at the time of its appearance.

Not an entirely easy read but highly interesting. I love reading about Russia and its vivid history but I had not really come across this timeframe.

Apparently, Tsar Ivan IV Vasilyevich aka "Ivan the Terrible", "Ivan the Formidable" or "Ivan the Fearsome" who reigned Russia for 28 years, was not regarded as terrible as he is always portrayed. He was highly intelligent and religious but also mentally instable. Still, in this novel we see mainly his bad side since the author did not want to describe the ruler in any way positive.

A lot is said about the life at court and the life of the poor people. The struggles they all have and how they try to get through them. As I already mentioned, highly interesting novel.

"The novel begins in 1565, during the reign of Ivan the Terrible. The Czar had just instituted the ferocious policing force of social upstarts, the oprichnina, who wage Ivan's personal war of fear against the old boyar families of the Russian aristocracy. With virtues the quality of silver, the hero of this story, Prince Serebryany (which translates as 'silver'), returns to Russia from five years fighting at the Lithuanian front to find things quite changed. Ivan's paranoia is a perfect foil for Prince Serebryany's moral uprightness; never does he doubt the Czar's role, never does he step outside his moral code of honor, while Ivan irrationally calls for mass executions, sentencing to death anyone his advisors whisper to him about. Out of favor with the Czar after a conflict with the oprichnina, the prince flees Moscow and finds himself elected the leader of a band of outlaws.

The Silver Prince was Alexey Konstantinovich (commonly referred to as A. K.) Tolstoy's first full length novel. Best known as a poet and dramatist, Tolstoy (1817-1875) was a Romantic writer in the midst of the dominant Realist movement. However, the reading public in nineteenth century Russia, and still today, loved the novel for its dramatic scenes of outlaw and court life where greed and virtue collide, while contemporary writers, steeped in the tenets of Realist literature, disliked the very romance the public enjoyed. As a close confidant of the Empress Maria Alexandrovna, who shared his interest in mysticism, Tolstoy read parts of this novel to her while he wrote it; it is the only prose work he dedicated to her.

The first English translation appeared in 1892, under the title Prince Serebryany, then in 1927 as Prince of Outlaws. This translation was done for the sheer love of the story and its lively descriptions."
Posted by Marianne at 11:11