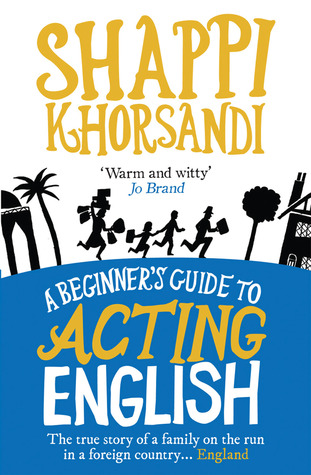 Since I don't live in England anymore, I can't go and see stand-up comedians live. But there are panel shows and quiz shows and other shows where they appear as hosts etc. So, this is how I got to know Shappi Khorsandi. She comes across as a lovely person, very funny, very comical. When I learned that she had written a book about coming to England as a three-year-old, I was very interested. I imagined it to be just as nice and funny as the author herself.

I was not disappointed. This book doesn't just tell us how it is to grow up in a strange country, it tells us a lot about Iran, as well. And not just about the politics but about the ordinary family life. How they lived under the Shah, how they lived after the revolution. And with her hints about how her parents were different from English parents, I also learned a lot about Iranian culture.

It's not a hilarious book but you can see where Shappi Khorsandi gets her sense of humour. It certainly is one of the best memoirs I have ever read. You get to know both the author and her entire family very well, you get to fear with them and mourn with them, laugh with them and love with them.

I also had the chance to compare how the Khorsandi family lived in England as foreigners and how we lived in England as foreigners. Two very different worlds. Granted, it was not exactly the same place and some twenty years later but we never really felt "foreign" or weren't treated as such. Someone told me that's because we spoke English and "fitted in" but I'm sure there are some more reasons behind that. In any case, I'm happy that the Khorsandis could make England their home and that their daughter became such a great comedian.

I loved this so much, I've already ordered her next book "Nina is not okay".

"When you're young just growing up seems hard enough. But if you've been shipped to a news country, away from all your beloved aunts and uncles, where you can't understand anyone it's even harder. And if the Ayatollah wants you and your family dead, then that's when it gets really tricky …

This is a story of growing up a stranger in a strange land with fish fingers and kiss chase and milk and biscuits. But it's also a story about exile, survival, and families - wherever they are."
Posted by Marianne at 12:34