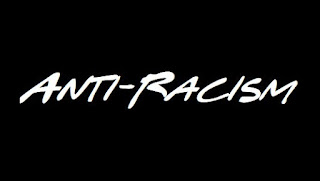 It is now hosted by That Artsy Reader Girl.

This week, the topic is:

I hardly ever put together a reading list, I just read different subjects at any time, some new books, some from my TBR, some book club books. etc.

However, Carol from the Reading Ladies Book Club has just published a list of Nonfiction/Fiction books and Racial Injustice (see here) and I wanted to do my own list about this, as well. Therefore, this is my proposed summer reading list. Wouldn't it be nice if everyone could read at least one book about racism this summer? There's so much to learn, let's give it a try.

These are all the books I read (or have on my TBR pile) that will fit into the "Black Lives Matter" topic. There are so many different kinds of racism in this world. My other books about racism are here.

Just now, Barack Obama shared another list by writer Jen Gray and encourages us all, to add these to our summer reading list. I have searched all the authors and dates of the books published. Sinc ei Had mainly the titles, I hope I found the right editions. You can see the pictures of some of the books here and here. My list is in alphabetical order.

Alexander, Michelle "The New Jim Crow: Mass Incarceration in the Age of Colorblindness" - 2010
Baldwin, James "The Fire Next Time" - 1963
Blackmon, Douglas A. "Slavery by Another Name: The Re-Enslavement of Black Americans from the Civil War to World War II" - 2008
Candelario, Ginetta E.B. "Black behind the Ears: Dominican Racial Identity from Museums to Beauty Shops" - 2007
Coates, Ta-Nehisi "Between the World and Me" - 2015
- "The Case for Reparations" - 2014
Cooper, Brittney "Eloquent Rage: A Black Feminist Discovers Her Superpower" - 2018
Diangelo, Robin "White Fragility. Why it's so hard for white people to talk about Racism" - 2018
Forman Jr., James "Locking Up Our Own: Crime and Punishment in Black America" - 2017
Gomez, Laura E. "Inventing Latinos: A New Story of American Racism" - 2020
Kendi, Ibram X "How to be an Antiracist" - 2019
- ". Stamped from the Beginning: The Definitive History of Racist Ideas in America" - 2016
Lowery, Wesley "They Can't Kill Us All: Ferguson, Baltimore, and a New Era in America’s Racial Justice Movement" - 2016
Maxwell, Zerlina "The End of White Politics: How to Heal Our Liberal Divide" - 2020
Moore, Darnell L. "No Ashes in the Fire: Coming of Age Black and Free in America" - 2018
Oluo, Ijeoma "So you Want to Talk about Race" - 2018
Ortiz, Paul "An African American and Latinx History of the United States" - 2018
Pollock, Mica "Everyday Antiracism: Getting Real About Race in School" - 2008
Reynolds, Jason; Kendi, Ibram X. "Stamped: Racism, Antiracism, and You" - 2020
Saad, Layla F. "Me and White Supremacy: Combat Racism, Change the World, and Become a Good Ancestor" - 2020
Stevenson, Bryan "Just Mercy: A Story of Justice and Redemption" - 2014
Tatum, Beverly Daniel " 'Why Are All the Black Kids Sitting Together in the Cafeteria?': A Psychologist Explains the Development of Racial Identity" - 2003
Theoharis, Jeanne "A More Beautiful and Terrible History: The Uses and Misuses of Civil Rights History" - 2018
Ward, Jesmyn; Jones, Kima; Cadogan, Garnette; Rankine, Claudia; Raboteau, Emily; Jackson, Mitchell S.; Trethewey, Natasha; Older, Daniel José "The Fire This Time: A New Generation Speaks About Race" - 2016
Wilkerson, Isabel "Caste. The Origins of our Discontents" - 2020
- The Warmth of Other Suns: The Epic Story of America's Great Migration" - 2010
Zamalin, Alex "Antiracism: An Introduction" - 2019

And then there is, of course, Emma Watson and her list of anti-Racism books on Our Shared Shelf:
Bay, Mia (ed.); Gates Jr., Henry Louis (Ed.) Wells-Barnett, Ida B. "The Light of Truth: Writings of an Anti-lynching Crusader" - 2014
Brown, Austin Channing "I'm Still Here: Black Dignity in a World Made for Whiteness" - 2018
Kendall, Mikki "Hood Feminism: Notes from the Women That a Movement Forgot" - 2020
Khan-Cullors, Patrisse; Bandele, Asha; Davis, Angela "When They Call You a Terrorist: A Black Lives Matter Memoir" - 2018
Love, Bettina L. "We Want to Do More Than Survive: Abolitionist Teaching and the Pursuit of Educational Freedom" - 2019
Oluo, Ijeoma "So you Want to Talk about Race" - 2018
Richie, Andrea J. "Invisible No More: Police Violence Against Black Women and Women of Color" - 2017
Saad, Layla F. "Me and White Supremacy: Combat Racism, Change the World, and Become a Good Ancestor" - 2020


A big shoutout goes to one of my blogger friends Sarah from All the Book Blog Names Are Taken who created a great list against racism:
Alexander, Michelle "The New Jim Crow"
Bennett, Michael "Things That Make White People Uncomfortable"
Butler, Paul "Chokehold: Policing Black Men"
DiAngelo, Robin "White Fragility: Why It’s So Hard for White People to Talk About Racism"
Dyson, Michael Eric "Tears We Can Not Stop: A Sermon to White America"
- "What Truth Sounds Like: Robert F. Kennedy, James Baldwin, and Our Unfinished Conversation About Race in America"
Eddo-Lodge, Reni "Why I’m No Longer Talking to White People About Race"
Ewing, Eve L. "Ghosts in the Schoolyard: Racism and School Closings on Chicago’s South Side"
Gormann, Elliot J. "Let the People See: The Story of Emmett Till"
Hawes, Jennifer Berry "Grace Will Lead Us Home: The Charleston Church Massacre and the Hard, Inspiring Journey to Forgiveness"
Hinton, Anthony Ray "The Sun Does Shine: How I Found Life and Freedom on Death Row"
Johnson, Ronald "13 Days in Ferguson"
Kendi, Ibram X "Stamped From the Beginning: The Definitive History of Racist Ideas in America"
- "How to be an Antiracist" Ibram X Kendi
Khan-Cullors, Patrisse "When They Call You a Terrorist: A Black Lives Matter Memoir"
Lewis, John "Walking With the Wind: A Memoir of the Movement"
Lowery, Wesley "They Can’t Kill Us All: Ferguson, Baltimore, and a New Era in America’s Racial Justice Movement"
Mitchell, Jerry "Race Against Time: A Reporter Reopens the Unsolved Murder Cases of the Civil Rights Era"
Morrison, Melanie S. "Murder on Shades Mountain: The Legal Lynching of Willie Peterson and the Struggle for Justice in Jim Crow Birmingham"
Oluo, Ijeoma "So You Want to Talk About Race"
Rothstein, Richard "The Color of Law: A Forgotten History of How Our Government Segregated America"
Saad, Layla F. "Me and White Supremacy: Combat Racism, Change the World, and Become a Good Ancestor"
Solomon, Akiba, Rankin, Kenrya "How We Fight White Supremacy"
Taibbi, Matt "I Can’t Breathe: A Killing on Bay Street"
Tisby, Jemar "The Color of Compromise: The Truth About the American Church's Complicity in Racism"
Tolan, Robbie "No Justice: One White Police Officer, One Black Family, and How One Bullet Ripped Us Apart"
Watkins, D. "The Beast Side: Living (and Dying) While Black in America"
- "We Speak For Ourselves: A Word From Forgotten Black America"
Wilkerson, Isabel "The Warmth of Other Suns: The Epic Story of America's Great Migration"

Last but not least, there is Oprah. I have all her book club books in my blogpost here that also includes a link to her page with lots more suggestions. Unfortunately, there is not a list on any of her pages, just pages to click through to get to the next book. Maybe I will be able to do a list one day but I doubt it.

Another of my blogfriends (Stuck in a Book) just published a list of the Virago Modern Classics by Black Authors courtesy of Juliana Brina from The Blank Garden.


* * *
I hope you'll forgive me that there are way more than ten books this week but I just couldn't delete any of them. They are all important.
Posted by Marianne at 11:26