Douglass, Frederick "Narrative of the Life of Frederick Douglass" 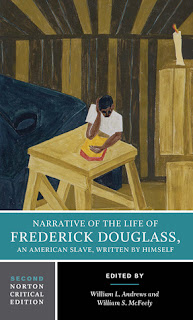 Douglass, Frederick "Narrative of the Life of Frederick Douglass, an American Slave" - 1845

After reading Harriet Jacobs' story "Incidents in the Life of a Slave Girl" earlier this year, I had this next on my list of books for one of my challenges. I thought the story of Harriet Jacobs was extraordinary but this one was even better. Probably, because it was told by the person who experienced this life himself. Frederick Douglass didn't learn reading and writing like we do, at school, he had to do it secretly. And what a writer he became.

I guess, freedom is something we all would wish for if it were denied to us. And not having experienced it, it would be impossible to understand how it is if you can't just choose where you want to live and what you want to do but also with whom you want to live. Families got ripped apart and you never knew what happened to your loved ones, probably nothing good.

The author understands all this very well. He has lived it. If you want to read about how a slave truly feels, this narrative is probably one of the best you can find. If you read this book, you will definitely join in with all the anti-racist people and organizations and say: Never again!

This is a very important book!

One of his quotes is:
"Once you learn to read you will forever be free."
But the best one is probably: "I know of no rights of race superior to the rights of humanity."

"Born a slave circa 1818 (slaves weren't told when they were born) on a plantation in Maryland, Douglass taught himself to read and write. In 1845, seven years after escaping to the North, he published Narrative, the first of three autobiographies. This book calmly but dramatically recounts the horrors and the accomplishments of his early years - the daily, casual brutality of the white masters; his painful efforts to educate himself; his decision to find freedom or die; and his harrowing but successful escape.

An astonishing orator and a skillful writer, Douglass became a newspaper editor, a political activist, and an eloquent spokesperson for the civil rights of African Americans. He lived through the Civil War, the end of slavery, and the beginning of segregation. He was celebrated internationally as the leading black intellectual of his day, and his story still resonates in ours."