Spell the Month in Books - September

I found this on one of the blogs I follow, Books are the New Black who found it at One Book More. It was originally created by Reviews from the Stacks, and the idea is to spell the month using the first letter of book titles.

This month, I was lucky again to find some books with just one title. Hurrah! 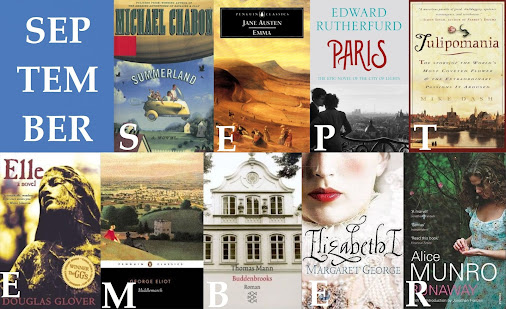 This is fantasy mixed with a little sports and adventure. A youth novel but interesting for adults, as well.

Not necessarily the most famous of Austen's novels. However, there is something likeable in Emma, Jane Austen's only heroine without money problems which makes it different to her other books.

Paris is one of my favourite cities in the world. And Edward Rutherfurd is a wonderful writer of history related to places.

T
Dash, Mike "Tulipomania: The Story of the World's Most Coveted Flower and the Extraordinary Passions It Aroused" - 2000

This book gives a lot of extra information about the craze about Tulips in the 17th century and almost reads like a crime story.

This award winning novel is based on a true story or legend, not a favourite among our book club members but interesting.

A wonderful book, a must for anyone who loves classic novels. "Middlemarch" is more difficult than, let's say, a Jane Austen novel but it is definitely worth reading.

B
Mann, Thomas "Buddenbrooks: The Decline of a Family" (German: Buddenbrooks) - 1901

I have read "Buddenbrooks" a couple of times and think this is one of the best books of German literature. A great family saga.

The story of Elizabeth I. 680 pages of it. Told by herself and her cousin Lettice, the granddaughter of her mother's sister. So we can see various sides of the Virgin Queen's life.

A brilliant collection of very interesting short stories that grip you from the first page.

Email ThisBlogThis!Share to TwitterShare to FacebookShare to Pinterest
Labels: Lists, Spell the Month in Books