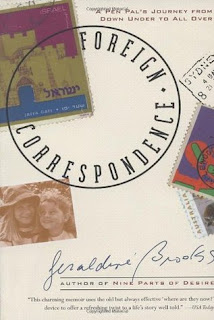 Brooks, Geraldine "Foreign Correspondence: A Pen Pal's Journey from Down Under to All Over" - 1997

Geraldine Brooks describes how she started writing to many different people from all over the world because she felt so far away from everything. That was the same for me, even though I lived in the middle of Europe. But at the time, the little village in Northern Germany might as well have been on the moon.

Other than that, there wasn't a huge difference in her upbringing and mine. We are about the same age and grew up in similar circumstances, though my parents were purely working class, no former singer or anything, and they were from the same area where they lived and died.

So, I really liked this story because it was also mine. When I was fourteen, I had my first penfriend. She was from Romania, and I met her once even though we are not in touch anymore. But I have two very good penfriends who started writing to me shortly afterwards, from France and the USA, and we are still in touch. The French friend has visited me several times (first alone, then with husband and family) and I have visited her, as well, same thing, first alone, later with husband, then with children.

I have lived abroad for more than half of my life. I think wanting to meet people from other countries stems from my first friendships by letters. I started to learn Esperanto when I got the opportunity and went abroad as soon as I was able to. Having penfriends certainly encouraged me to explore the world further.

But even if you don't belong to the keen letter writers, Geraldine Brooks has a fantastic way of describing her life as well as that of others, totally interesting.

So far, I have only read this book and "March" by Geraldine Brooks. Must change that.

"As a young girl in a working-class neighborhood of Sydney, Australia, Geraldine Brooks longed to discover the places where history happens and culture comes from, so she enlisted pen pals who offered her a window on adolescence in the Middle East, Europe, and America. Twenty years later Brooks, an award-winning foreign correspondent, embarked on a human treasure hunt to find her pen friends. She found men and women whose lives had been shaped by war and hatred, by fame and notoriety, and by the ravages of mental illness. Intimate, moving, and often humorous, Foreign Correspondence speaks to the unquiet heart of every girl who has ever yearned to become a woman of the world."