This week, our topic is Most Anticipated Books Releasing In the First Half of 2022 but most of them are already in my list Books I Hope Santa Brings.

So, I needed to twist this. Since we are at the beginning of a year and everyone talks about new beginnings, I thought about books that tell us about people's new lives in another country. They are all fantastic books. 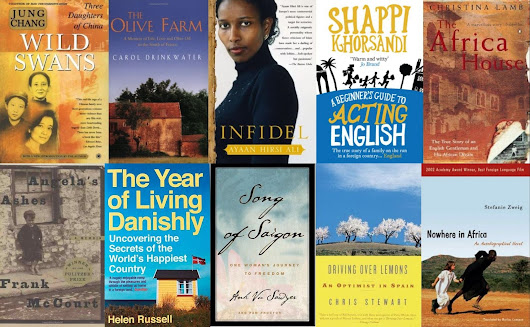 From China 🇨🇳 to the UK 🇬🇧:
Chang, Jung "Wild Swans: Three Daughters of China" - 1991
From the UK 🇬🇧 to 🇫🇷 France:
Drinkwater, Carol "The Olive Farm" and further Olive Farm Books - 2001-2010
From Somalia 🇸🇴 to the Netherlands 🇱🇺:
Hirsi, Ali, Ayaan "Infidel: My Life" (NL: Mijn Vrijheid) - 2006
From Iran 🇮🇷 to the UK 🇬🇧:
Khorsandi, Shappi "A Beginner's Guide to Acting English" - 2009
From the UK 🇬🇧 to Zambia 🇿🇲:
Lamb, Christina "The Africa House: The True Story of an English Gentleman and His African Dream" - 1999
From the USA 🇺🇸 to Ireland 🇨🇮:
McCourt, Frank "Angela's Ashes" - 1996
From the UK 🇬🇧 to Denmark 🇩🇰:
Russell, Helen "The Year of Living Danishly: My Twelve Months Unearthing the Secrets of the World's Happiest Country" - 2015
From Vietnam 🇻🇳 to the USA 🇺🇸:
Sawyer, Anh Vu "Song of Saigon: One Woman’s Journey to Freedom" - 2003
From the UK 🇬🇧 to Spain 🇪🇸:
Stewart, Chris "Driving over Lemons" - 1999
From Germany 🇩🇪 to Kenya 🇰🇪:
Zweig, Stefanie "Nowhere in Africa" (GE: Nirgendwo in Afrika) - 1995

Have a happy New Year, wherever you are!
Posted by Marianne at 11:28