This week, our topic is Most Recent Additions to My Book Collection and I didn't even have to twist that topic as much as usual. I just chose my bookish Christmas presents. 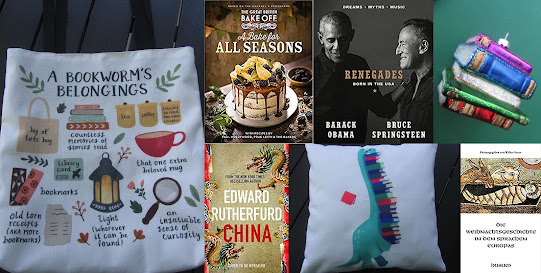 The Bake-Off Team "The Great British Bake Off: A Bake for all Seasons" - 2021 (Goodreads)

Whilst the first three were on my wishlist, I hadn't even heard of the last one. My brother found it this summer and knew it was the perfect Christmas present for me. And it was. It contains all European languages including e.g. Basque and some languages I had never heard of as well as my native language Lower German and Esperanto. Brilliant.

The non-books among my bookish presents are a large and sturdy tote for all of the "bookworm's belongings" (including a tote, LOL), a pillow with a dinosaur carrying lots and lots of books and a Christmas ornament that went directly on our tree.

The most beautiful Christmas present, however, was that my sons made it home this year.