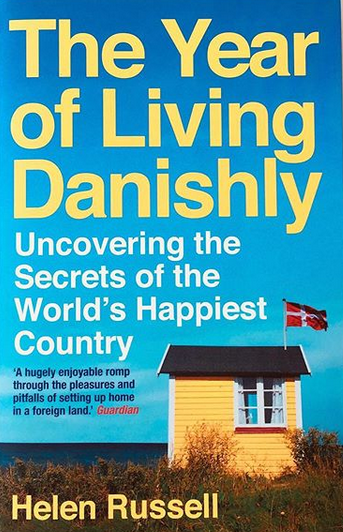 Russell, Helen "The Year of Living Danishly: My Twelve Months Unearthing the Secrets of the World's Happiest Country" - 2015

When I started reading the book, I thought, oh, no, not another one of those travel books where some naïve foreigner starts living abroad and gets everything wrong. Because that's what it looked like over the first couple of chapters. But - Helen Russell finds a way out of it and describes in a very humorous way how lovely the little country in Scandinavia really is.

While she settles in her little house in "Sticksville-on-Sea" with "Lego Man" with some outings into "The Big Town", she tries to find out what makes Danish people so happy. Especially looking at the kind of taxes they pay. But the secret might just be that, the Scandinavians have found a way to make people more equal, to give everyone a safe and secure life. They don't have to worry about health insurance, education for their children, retirement, the state and the taxes they pay take care of that. A happy socialism, if you want.

She befriends some neighbours - which can be difficult sometimes and is made more complicated for her because they arrive in January when everyone has gone into hibernation and learns about Danish life through interviews with specialists and the "little man in the street". And she notices, how much calmer life in rural Denmark is as opposed to busy London. Something I could have told her before. LOL

While she tries to not give any big hints about her whereabouts, like not naming the names of towns but referring to them with nicknames, one can easily guess though what she is talking about, especially if you've been to Denmark and included a trip to Legoland. You probably have been there, as well.

I have Scandinavian friends and while a lot of them tend to be a little quieter, like explained by the author, most of them seem very content and happy to me. So, I think there might be something to the hygge feeling described. I did like this book and will try to read more by her. Because, even though she had only planned to stay for a year, she is still there after almost a decade. That speaks for itself.

Oh, and there is one more funny note when she celebrates Christmas with her neighbours:
They are assured that "most Christmas celebrations tend to be restricted to 'jumping off the sofa at midnight, then going outside to look at the fireworks, then watching a black-and-white film of an old lady being brought food by her butler." Apparently, nobody knows about the film but I can explain that. The film is only 18 minutes long and is based on a play written by Lauri Wylie. It's called "Dinner for One". There are only two characters, Miss Sophie and her butler, portrayed by British comedians May Warden and Freddie Frinton. In 1962, German entertainer Peter Frankenfeld watched the sketch in Blackpool and persuaded the two of them to come to Germany and film it there. It has been on German TV every New Year's Eve since then. From there, it made its way into Scandinavia and many other European countries, though not into the United Kingdom. And, as her neighbours pointed out so eagerly: It's tradition!

If you are interested in a funny little story, watch it here:

And if you haven't been to Denmark, put it on your bucket list.

"Given the opportunity of a new life in rural Jutland, Helen Russell discovered a startling statistic: Denmark, often thought of as a land of long dark winters, cured herring, Lego and pastries, is the happiest place on earth.

What is the secret? Helen decides there is only one way to find out: she will give herself a year, trying to uncover the formula for Danish happiness.

From childcare, education, food and interior design to SAD and taxes, The Year of Living Danishly records a funny, poignant journey, showing us where the Danes get it right, what they get wrong, and how we might all live a little more Danishly ourselves."
Posted by Marianne at 12:02