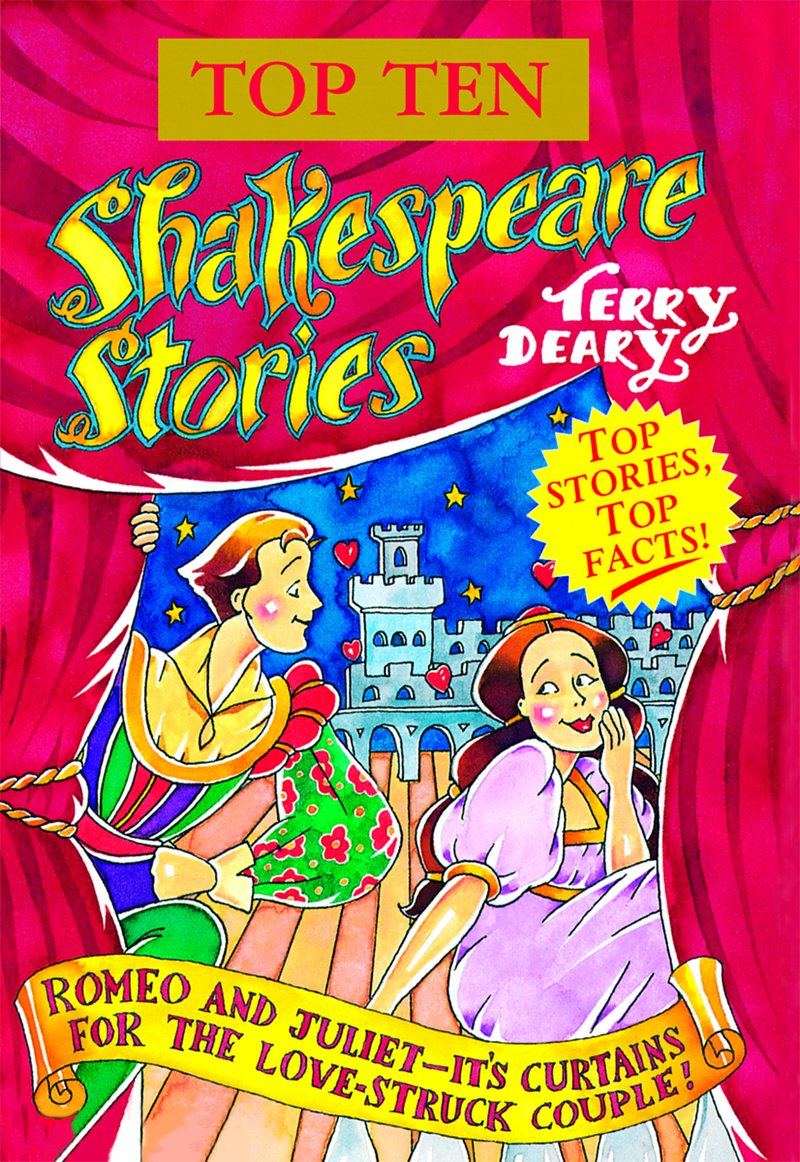 This book is another of the Scholastics "Top Ten" book series for children. After "Top Ten Classic Stories" and "Top Ten Dickens Stories" by Valery Wilding, this time it's "Top Ten Shakespeare Stories" by Terry Deary, him of "Horrible Histories" fame.

He describes Shakespeare and his stories just as well. The stories are all told in a modern way, a video, a blog, a diary, anything that kids today might use. And it is also quite interesting for adults
With every story comes a chapter that explains either more about what was in the story or the general topic from the story. In any case, in a way that even kids who don't like reading or don't want to hear of former times might be interested in them and maybe … just maybe, read some of them one day.
Whether you agree with the list or not, this certainly is a great way to introduce children to classic reading.
This is his list.

10. A Midsummer Night's Dream
9. King Lear (I read a retold version by Jane Smiley, "A Thousand Acres")
8. Twelfth Night
7. The Tempest (I read a retold version by Margaret Atwood, "Hag-Seed" and watched the wonderful musical "Return to the Forbidden Planet" which is also based on this play)
6. The Merchant of Venice
5. Romeo and Juliet
4. Julius Cesar
3. The Taming of the Shrew
2. Macbeth. He also explains why they call it "The Scottish Play".
1. Hamlet (plus a retold version by David Wroblewski "The Story of Edgar Sawtelle")

I have added links to my reviews of those books I read. As you can see, others have rewritten the stories for the more modern reader, before and I'm sure, they will continue doing so. After all, Shakespear has written at least 39 plays that are all worth retelling.

"What was top of the pops in Tudor times?
Want to know which Shakespeare story's had the number one slot since the 16th century?

Hamlet - ten dead bodies litter the stage. Horatio is number one suspect … but is it an open and shut case?
A Midsummer Night's Dream - strange things are happening in the woods. Puck mucks things up and Bottom makes an ass of himself. Puck reveals all.
King Lear - eye-gouging, stabbing and poisoning … act out the play yourself - it's a laugh a minute!
With top ten fact sections, including Shakespeare's suffering spectators, the curse of the Scottish play, and top then actors' tales.

Shakespeare stories as you've never seen them before."
Posted by Marianne at 11:34