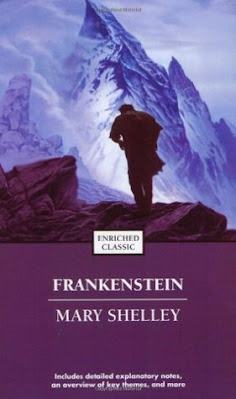 I always wanted to read this book, it's one of the classics that doesn't really fit into my usual genre but it is definitely a classic. Apparently, one of the very first science fiction novels. Mary Wollstonecraft spent some time in Switzerland with her later husband Percy B. Shelley and Lord Byron when they decided to have a competition. Who would write the best horror story? I haven't read any of the two other authors but I'm sure Mary won this one.

Like a said, not my usual genre but our book club chose it as a solution to the lockdown procedures which prevented many of us to use our usual library and therefore, we needed something we could find online. Luckily, my son still has part of his books in our house so that I even had the book.

Frankenstein is not the monster, as people often believe. He's the creator. Although, maybe he has the touch of a monster in himself as he doesn't really care what will become of his creation. He is so ugly that he can't socialize and therefore becomes a monster.

This book is not just a horror story, there's a lot of psychology behind the scenes. We can look inside human beings, their dreams and their ambitions.

What I liked about the science fiction part, there are no strange explanations about how the being is created. You see this so often in films that they make something that is absolutely impossible in a way that you know wouldn't work. This way, there is nothing we can say was done incorrectly. We just have to imagine that it happened.

And before I forget, this is great writing. Not just the plot, also the style and technique are wonderful. Beautiful classic.

This was our international online book club novel in June 2020.

"Mary Shelley began writing Frankenstein when she was only eighteen. At once a Gothic thriller, a passionate romance, and a cautionary tale about the dangers of science, Frankenstein tells the story of committed science student Victor Frankenstein. Obsessed with discovering the cause of generation and life and bestowing animation upon lifeless matter, Frankenstein assembles a human being from stolen body parts but; upon bringing it to life, he recoils in horror at the creature's hideousness. Tormented by isolation and loneliness, the once-innocent creature turns to evil and unleashes a campaign of murderous revenge against his creator, Frankenstein.

Frankenstein, an instant bestseller and an important ancestor of both the horror and science fiction genres, not only tells a terrifying story, but also raises profound, disturbing questions about the very nature of life and the place of humankind within the cosmos: What does it mean to be human? What responsibilities do we have to each other? How far can we go in tampering with Nature? In our age, filled with news of organ donation genetic engineering, and bio-terrorism, these questions are more relevant than ever."
Posted by Marianne at 10:42