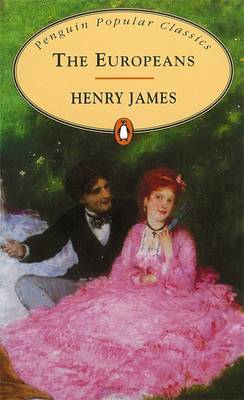 I think I just expect too much from Henry James. I want him to be the American Charles Dickens. He is not. He is, however, quite good at describing the difference between the United States of America and Europe at the time. Especially that of the higher part of the society.

I did like the conversations and the reflections about the different lives in the two countries.

Like all books by Henry James, too short! That makes it a wonderful start for someone who isn't too keen on classics, though. I still want to read more by this author because he gives us an insight into a world that is long gone. Or is it?

"This light-hearted masterpiece tells of the influence Eugenia and her brother Felix exert on their Bostonian cousins when they visit the New World.

In the hope of making a wealthy marriage, Eugenia, the Baroness Münster, and her younger brother, the artist Felix, descend on the Wentworths, in Boston. Installed in a nearby house, they become close friends with the younger Wentworths - Gertrude, Charlotte and Clifford.

Eugenia's wit, guile and sophistication, and Felix's debonair vivacity from an uneasy alliance with the Puritan morality and the frugal, domestic virtues of the Americans. A rich and delicately balanced comedy of manners, The Europeans weighs the values of the established order against those of New England society, but makes no simple judgements, only subtle contrasts and beautifully observed comparisons."
Posted by Marianne at 11:58